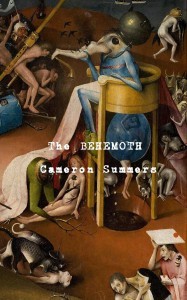 The cover, with thanks to Hieronymous Bosch.
A supernatural fiction novel written by Cameron Summers and released on kindle in early 2015. The Behemoth is the story of Roger Harding, a librarian in a university library whose best friend (and the object of a long-standing crush) is ritualistically murdered. He is drawn into an informal investigation of this incident, and a subsequent revenge plot.
Advertisement:

This incident also released into the world a strange parasite that takes up residence in his skin, giving him a connection to the murderer, increased resilience, and an ability to perceive the parasite's home dimension, a strange otherworld that the murderer seeks entry into and mastery over.

Can be bought from Amazon,

and the author is answering questions on his website.