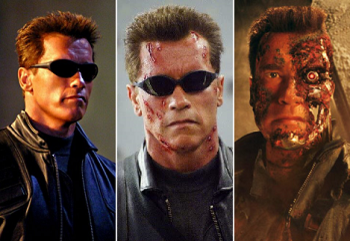 He'll be back... but his flesh won't.
A character gradually accumulates injuries over the course of a story, but rather than shrug them off, he shows the traces of every one of them and ends up a bleeding, black-eyed Implacable Man limping toward his goal. He quite literally looks like the world has chewed him up and spat him back out.
Advertisement:

Expect a lot of Clothing Damage and an attitude of Tranquil Fury. Can be just as easily Played for Laughs or Played for Drama — the latter can work as a subversion of Just a Flesh Wound, as it shows that what doesn't kill you can still slow you down a hell of a lot.

Rasputinian Death is a subtrope where the injuries are each of the No One Could Survive That! variety, and the final fatality actually sticks.

Compare: Crush Parade when characters and objects are repeatedly run over and trampled by different things; Covered in Scars when a character bears the marks of past injuries for the rest of his life. Serial Prostheses might result from this. Contrast Death by Disfigurement, where one lasting wound will spell a death sentence not very sooner.