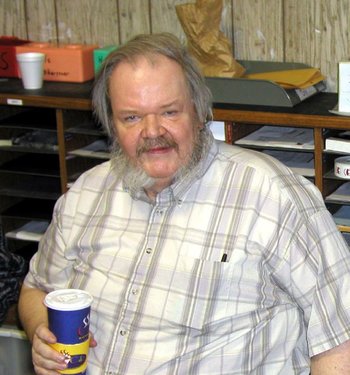 Prolific American science fiction and fantasy author of over 60 works. Probably best known for his larger serial works, particularly the Well World (SF) and Dancing Gods (Fantasy) sagas, though he also wrote several stand-alone books and nonfiction works including a definitive biography of H.P. Lovecraft and a huge and comprehensive history of Science Fiction and Fantasy publishing.

Today Chalker is most famous (indeed notorious) for the sheer amount of Author Appeal packed into his works, exceeded perhaps only by Piers Anthony in this regard. A typical character in a Chalker book can expect to undergo at least one Involuntary Transformation and/or Gender Bender. (And, seeing as it is a Chalker book, quite lucky if that's the worst thing that happens to them.)

Chalker also wrote a number of books in which characters do not undergo horrible transformations, as well as books that contain transformation that are anything but horrible. But since one person's Body Horror is often another person's fetish, those aren't the works he tends to be remembered for.

Works by Jack Chalker with their own trope pages include:

Other works by Jack Chalker include examples of: