My Country Tis of Thee That I Sting 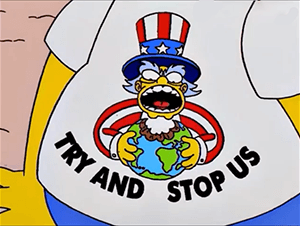 An anti-patriotic joke made by people from the very country it's poking fun at.
"If what your country is doing seems to you practically and morally wrong, is dissent the highest form of patriotism?"
— The Use of Force in International Affairs (1961). note The quote has been misattributed to Thomas Jefferson, but has been used by Howard Zinn in his Dissent In Pursuit of Equality, Life, Liberty And Happiness: An Interview With Historian Howard Zinn (2002).
Advertisement:

While patriotism can be noble or nice, there can be times when one is ashamed of their country. Usually it's politically or socially motivated. Some people dislike the imperialistic, militaristic, chauvinistic or nationalistic approach of their own government and fellow citizens.

These are the people who feel that My Country, Right or Wrong is mostly wrong and have nothing but contempt for Misplaced Nationalism. They will vocally criticize their own country and feel that they are in their right to do so since they were born there themselves. Though they can sometimes be categorized as misanthropes or a Boomerang Bigot there are also enough examples of people having good reasons and/or arguments to criticize their country of birth. This can result into active protest marches with the intent to change things. Or, in a less drastic fashion, result in Self-Deprecation comedy, done for satirical purposes.

In some countries such criticism is seen as highly unpatriotic, even treasonous. Dictatorships are the most obvious example, but even in some democratic countries expressing such opinions can bring people into serious trouble, and politicians opposing those in power will take pains to emphasize that they love their country despite their disagreements. Yet, in a truly free society criticism of your own country should be respected. Lots of sociological revolutions and changes have occurred just because people questioned the ideas of their government and society, and many modern countries trace their founding date to such uprisings, celebrating them with patriotic songs and holidays. People who embody this trope usually consider criticism of their homeland as an act of patriotism in itself, reflecting the other part of My Country, Right or Wrong: if wrong to be set right.

Contrast with Propaganda Piece. See Misplaced Nationalism for criticism of one people or country towards another. Offending the Creator's Own would be the religious and ethnic equivalent of this trope. See also Cultural Cringe, when this is done against a creator's culture, and Biting-the-Hand Humor, when this is done against the production's distributor. Compare Hail to the Thief, when criticism is directed toward the head of state, often in song.

Please make sure that only examples are added where the criticism is made by a person born in the country they criticize.