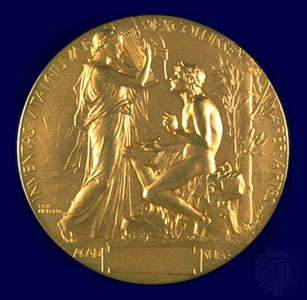 The Nobel Prize in Literature is one of the five Nobel Prizes established by the will of Swedish industrial tycoon Alfred Nobel in 1895. It has been awarded annually since 1901 (minus a few years when it was not awarded).

It is considered the world’s most reputable prize for literature — and by far the most lucrative, with the prize money amounting to circa US$ 1 million or more.note The exact amount depends on the Nobel Foundation's income within the past year. This is owed to Nobel’s intention that the prize should allow laureates to continue their work unaffected from any further financial concerns.

The prize is awarded by the Swedish Academy

. Nomination of candidates can only made on request, of which there are a few thousand each year. The decision-making process takes up more than nine months, from the nomination deadline on January 31 to the announcement of the winner in early October. The Nobel Prize Award Ceremonynote except for the Nobel Peace Prize, which has a separate Award Ceremony in Oslo each year takes place on December 10 (the anniversary of Alfred Nobel's death) in Stockholm. The prize is presented by the King of Sweden.

The prize is awarded to authors who, in the judgement of the Academy and according to the words of Alfred Nobel, has produced "in the field of literature, the most outstanding work in an ideal direction". "Work" here is referring to the candidate's work as a whole, not a specific work, although specific works may be cited as particularly notable by the Academy. Any category of writer is eligible for the prize – poets, novelists, playwrights or authors of short stories as much as essayists, philosophers, historians, translators or orators. As with the other Nobel Prizes, the prize can be split between up to three recipients, though it rarely happens (four times so far). Also, the Academy doesn’t have to award the Prize; it was not awarded seven times during World War I and World War II.

Over the years, Nobel’s phrase “in an ideal direction” has been the subject of varying interpretations. In the beginning, the condition was interpreted rather narrow and accordingly, famous writers who did not display enough “idealism” in their writings were not considered for the prize. Over time, the phrase has come to be interpreted more liberally, though expressing a commitment to causes like human rights is still considered helpful to get the prize.

Moreover, as the Nobel is awarded only once a year, there is a certain competition. Since the prize is mostly given to authors who already had a veritable writing career, an author that just dies too young may never have the chance to win it, regardless of merit.note The youngest laureate was Rudyard Kipling at the age of 42.

All these factors have resulted in very renowned and/or well-known authors not getting the prize, while other, more obscure or less influential writers did get it. A few of the writers that, for one reason or another, did famously not get it are Leo Tolstoy, Henrik Ibsen, Henry James, Emile Zola, Mark Twain, Thomas Hardy, Anton Chekhov, August Strindberg, Jorge Luis Borges, Chinua Achebe, Vladimir Nabokov and James Joyce. Two authors, Jean-Paul Sartre and Boris Pasternak, were awarded the Prize, but declined it.note Sartre because he refused to accept prizes categorically, Pasternak due to Soviet government pressure.

Inevitably, the annual award of the Nobel Prize for Literature is more often than not surrounded by controversy. Whether rightly or wrongly, the award is often interpreted as a political statement (even if less so than the Nobel Peace Prize). However, as the nominations, shortlists and deliberations of the Academy are confidential for 50 years, any assertions why an author got or didn't get the prize are, in fact, speculative.

The most frequent general criticisms leveled at the Academy's choices are Eurocentrism; a bias in favor of Sweden (Swedes have received more prizes than all of Asia or Latin America — in 1974 the Swedish Academy famously awarded its own members, Eyvind Johnson and Harry Martinson, the prize as a sort of lifetime achievement award); and bias in favor of men: as of 2019, there have been 116 Nobel Prize winners, of whom only 15 were women.

Winners of the Nobel Prize in Literature: