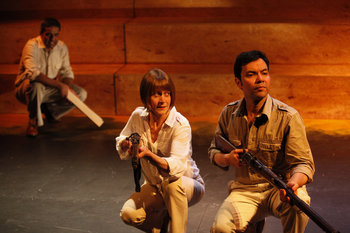 A still from a 2011 Off-Broadway stage version.

''"This desert inaccessible
Under the shade of melancholy boughs."''
—As You Like It

Burmese Days, first published in 1934, was George Orwell's first novel, inspired by the five years he (under his real name, Eric Arthur Blair) spent in the then British colony of Burma (aka Myanmar) as a member of the Indian Imperial Police, in the days when Burma was ruled as the easternmost province of The Raj.

Once upon a time in 1926, in the stifling, lonely, tropical backwaters of British-controlled Burma, intrigue is slowly brewing. In the small rural outpost of Kyauktada, the corrupt native magistrate U Po Kyin has shifted his predatory mind into high gear, plotting against the Indian Dr Veraswami, the community doctor and surgeon. News has it that the local European Club, heretofore exclusive to Europeans in their unassailable bigoted logic, is finally opening membership to nonwhites and natives, and Dr Veraswami stands a good chance of being elected due to his close friendship with the very white, very English timber merchant, John Flory. To that end, U Po Kyin begins a covert smear campaign to devastate the good doctor's reputation, chiefly by accusing Dr Veraswami of sedition and disloyalty to the Empire, as well as by getting in between his and Flory's friendship.

Meanwhile, Flory has become thoroughly jaded and fed up after almost fifteen years in the sticks, even as at the same time he has adapted to the local climate and come to appreciate far more about local cultures and customs than any of his white compatriots likely ever will. Still, his health is shot, he has no other friends, and the ragged birthmark on his face has subjected him to constant ridicule or ostracism from almost all quarters. Other than his tiny local mistress, Ma Hla May, he has not known the genuine affections of a woman, and so understandably Flory gets his hopes up when Elizabeth Lackersteen, the niece of a drunkard Club acquaintance of his, rolls into Burma in general (and Kyauktada in particular) looking for a potential husband.

Together the two friends begin scraping at means to escape their horrid, prison-like lives: Dr Veraswami to win acceptance to the Club, and Flory to marry Elizabeth, return to England, and settle down with a family.

But this is Burma, of course, and the ways of the Empire are greedy, brutal, hypocritical and unchanging. And between the intractable racist logic of the European Club on the one hand, and the ambitious machinations of U Po Kyin on the other, our heroes will soon find that the Empire will not change for them, and that it would be exceedingly useless to stand in opposition …