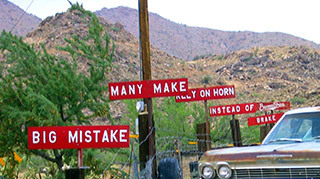 "READ TV TROPES
'TIL YOU'RE ADDICTED
DON'T BE SURPRISED
IF YOU'RE EVICTED"
— Burma-Shave
Advertisement:

During the early part of the 20th century, a shaving cream manufacturer got an idea for advertising its new product: They put very short poems (five or six lines), one line at a time, on various highways, such that each line was just short enough to read while driving along. The final line was always the product's name and logo: Burma-Shave. There were hundreds of different jingles, plus thousands made up by customers for contests. The vast majority of the unadopted jingles suggested by the public probably insinuated questionable or obscene uses of the product.

"HE PLAYED
A SAX
HAD NO B.O.
BUT HIS WHISKERS SCRATCHED
SO SHE LET HIM GO"
— Burma-Shave

A lot of the rhymes have passed through time so much that many people today won't get them. The following would have been a Shout-Out to Smith Bros. Cough Drops, which showed two bearded men on the box:

When Burma-Shave came out, the idea of using a special cream (rather than soap) was a new idea, so the company needed a new way to get noticed. Thus became the original use of what would later be referred to as "the jingle": a short, catchy tune to remind you of the company's product—only Burma-Shave's ads were simply silent poems.

This advertising development, combined with faster travel on major highways, later led other advertisers to develop the billboard, a large advertisement carrying an image and a small amount of text.

Alas, Burma-Shave's cute messages became a victim of technology — better shaving products came out and cars got faster, making it harder to read the signs — as well as government regulation, as the taxes on their advertising signs became prohibitive. So Burma-Shave's ads faded off to that great advertising road in the sky, along with television commercials for cigarettes and such mascots as Speedy Alka-Seltzer, the Hamm's Beer Bear and Joe Camel. Reproductions of the signs, however, currently liven up the drive on Arizona Highway 66, part of the original Route 66. Ironically, Arizona was one of the few states where Burma-Shave never installed any of their original ads, on the argument that the state's population density wasn't high enough to guarantee enough passing drivers to spot them regularly. This is also why Burma-Shave never advertised in Nevada or New Mexico. (Massachusetts was also skipped for its lack of roads that didn't have curves or foliage in the way.)

Advertisement:
"AT INTERSECTIONS
LOOK EACH WAY
A HARP SOUNDS NICE
BUT IT'S HARD TO PLAY"
— Burma-Shave

The Other Wiki has an article here

The story of the campaign's creation and life — along with a generous selection of the verses — can be found in the book The Verse by the Side of the Road: The Story of the Burma-Shave Signs and Jingles, by Frank Rowsome Jr.