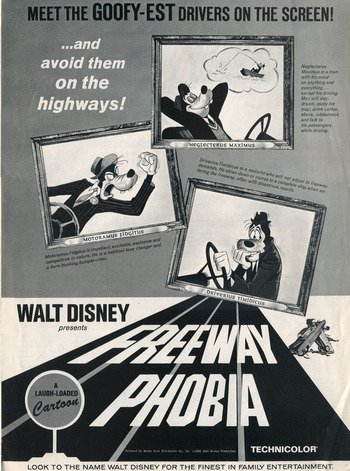 Don't take
A curve
At sixty per.
We hate to lose
A customer.
Burma-Shave
Advertisement:

An Aesop that is really important is that "dangerous driving" is really dangerous. This trope usually comes into play in a Very Special Episode on driving safely. A character may be severely injured (at least for the duration of the episode) or killed as a result of taking chances behind a steering wheel, or as the result of another character's bad driving decision.

Many of these are aimed at younger drivers, seen (with some justification) as being more likely to engage in risky driving behavior. However, older demographics have always gotten hit with the "don't drive drunk" message, and are getting more of these storylines as other distractions behind the wheel such as cell phones become more commonly used by older drivers.