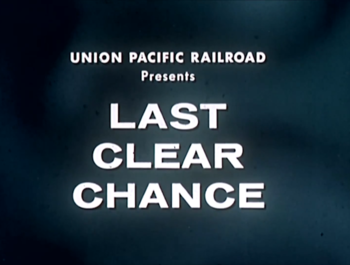 Last Clear Chance is a 1959 Glurge-fest brought to you by Union Pacific, that shows just how stupid people get around trains.

Idaho State Patrol Trooper Hal Jackson (played by William Boyett) visits a local family (established as friends), whose youngest son Alan has recently received his driver's license. Knowing Alan has a tendency to bend the rules a bit, he gives a lecture about the consequences of unsafe driving - one story ends in the death of one of Alan's friends - and especially emphasizes the dangers of risky behavior at railroad crossings. Alan, much chastened, swears to use caution and obey traffic laws at all times.

But has Trooper Hal's grim lesson sunk in, or will innocent people perish under the wheels of our mortal enemy, the train? (Answer: Yes.)

While maligned by some as too narmish – particularly for the train conductor's sad and anguished "Why don't they look?" – it was lauded by many others as a sobering effort to instill safe driving in young drivers. The movie itself was filmed in southwestern Idaho, with some footage also filmed in northern Colorado.