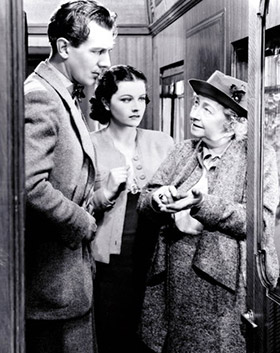 The Lady Vanishes is a 1938 mystery/thriller film starring Margaret Lockwood and Michael Redgrave, and one of the last films Alfred Hitchcock directed before he left his native Britain and went off to Hollywood.

After receiving a nasty bump on the head, Iris Henderson (Lockwood), a young English socialite who's on her way back home from a vacation tour, meets Miss Froy (May Whitty), a nice middle-aged lady, on board a train travelling through Bandrika, a fictional country somewhere in central Europe. They get on nicely for a while, when suddenly... the lady vanishes (what a twist). Iris and the caddish-yet-loveable Gilbert (Redgrave) promptly try to locate her - but nobody seems to remember seeing Miss Froy. Did Iris just hallucinate her? Or is there foul play at work?

All right, there is foul play. But there's also a Screwball Comedy relationship between Iris and Gilbert. And two hilariously over-the-top Englishmen obsessed with Cricket. This is consequently one of Hitchcock's more lighthearted films — think The 39 Steps.

The film, which is based on the 1936 novel The Wheel Spins by Ethel Lina White, was remade in 1979, with Angela Lansbury in the title role, and a TV movie version aired on The BBC in 2013. Unofficially, the 1976 Hitchcock homage Silver Streak and the 2005 Jodie Foster film Flightplan have quite a few similarities to it.

Examples specific to the remakes: