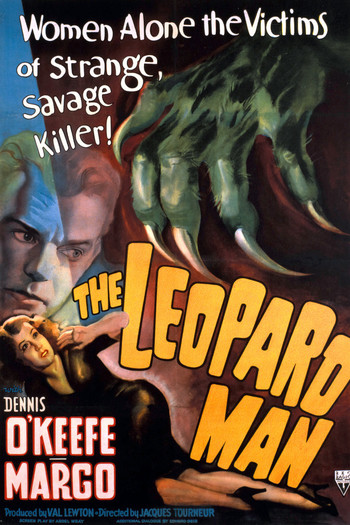 The Leopard Man is a 1943 horror/film noir produced by Val Lewton, adapted from the novel Black Alibi by Cornell Woolrich. It's the last of Lewton's collaborations with director Jacques Tourneur.

In a New Mexico tourist-trap town, two nightclub performers, Kiki (Jean Brooks) and Clo-Clo (Margo) have a fierce rivalry. Kiki's boyfriend/manager, Jerry (Dennis O'Keefe), rents a leopard from Charlie-How-Come (Abner Biberman) so she can upstage Clo-Clo's dance. Unfortunately, Clo-Clo scares the leopard away with her castinettes, and it gets away, crushing a waiter's hand in the process.

Later that night, it kills a little girl. Soon after that, another girl is killed when she goes to meet her boyfriend in the cemetery. The leopard again is blamed, but while Charlie acknowledges that his cat was responsible for the first death, he has doubts about the second one and calls it murder. He and Jerry go see Dr. Galbraith of the Natural History Museum, and Galbraith puts it in Charlie's head that he might have committed the murder while he was drunk.Could he really be the killer?