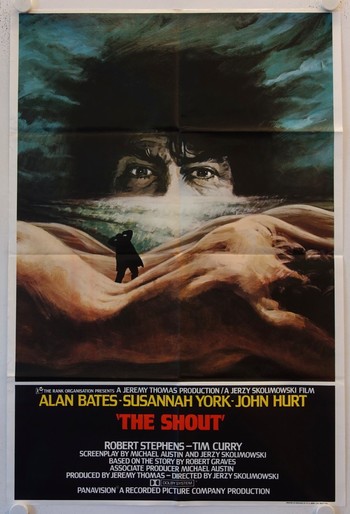 The Shout is a 1978 British horror film directed by Jerzy Skolimowski, based on a short story by Robert Graves that was adapted for the screen by Michael Austin. The film stars Alan Bates, Susannah York, John Hurt, Robert Stephens and Tim Curry, and features Jim Broadbent in his first feature role.

Bored while officiating a cricket match at a psychiatric hospital, Crossley tells Graves (a visitor) the tale of a mysterious stranger (also named Crossley) who invades the lives and house of a local musician and his wife. The stranger claims knowledge of real magic, which he uses to displace his host and dominate his wife. The musician must find a way to combat Crossley and his seemingly implacable powers. Graves doubts Crossley's claim that the story is true, and begins to believe that Crossley is actually one of the patients.