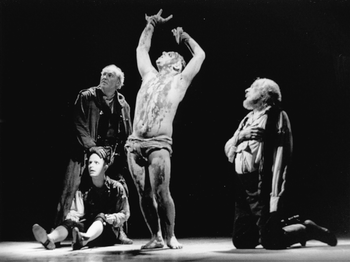 In fiction, there are many ways of indicating that a character has lost their sanity, some of them subtle, some of them not: disarrayed hair, haunted-looking eyes, filthy clothes, a habit of speaking to people who aren't there, a fixation on certain words or phrases, a tendency to sing inappropriately... or maybe the character has just given up on wearing clothes.

By far the least subtle indication of mental woes, characters who exhibit this symptom demonstrate their burgeoning insanity by stripping down. A few modest variants on this theme may leave their underwear on, or at the very least only qualify as a Walking Shirtless Scene; an even rarer few might actually have a good reason for going nude - one that make sense to them, anyway; the rest are more than happy to wander around completely naked for no apparent reason whatsoever.

May overlap with Naked People Are Funny. May involve Fan Disservice, especially if the scene is played for horror or revulsion. See Barefoot Loon when this is restricted to a lack of footwear.

Compare and contrast Full-Frontal Assault, which is most commonly concerned with people fighting in the nude (sane or otherwise).