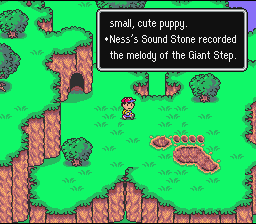 After all of that work, this song better be good...
Take a melody...
Simple as can be...
Give it some words and sweet harmony...
Raise your voices
All day long now
Love grows strong now
Sing a melody of love
Oh, love
— Eight Melodies, EarthBound Beginnings
Advertisement:

The Sound Stone is a specific type of MacGuffin which is an instrument, melody, music track, or part of a song which must be used or collected in order to achieve some purpose. Often a Sound Stone instrument must need another Sound Stone melody to work.

The Trope Namer is the Sound Stone, a plot-critical key item in EarthBound (1994) which collects and records eight melodies from around the world.