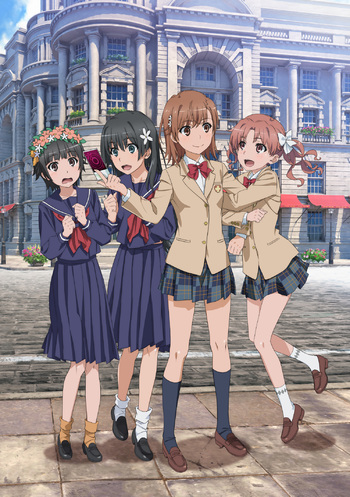 L - R: Kazari Uiharu, Ruiko Saten, Mikoto Misaka, Kuroko Shirai
"Everyone has to look out for themselves. That's the way it works."
— Mikoto Misaka
Advertisement:

Mikoto Misaka is the third-most-powerful Esper in Academy City, a state-of-the-art city dedicated to the scientific study and development of Psychic Powers. Every student in Academy City is given an "Esper Level" to indicate their power, and Mikoto is a Level 5: the best of the best, an electromaster with the nickname of "The Railgun".

Together with her friends in "Judgment" (the student-run "Public Moral Committee"), she works to protect the peace in Academy City from delinquents and hoodlums. The story narrates the events of A Certain Magical Index from Mikoto's perspective, as well as delving into her own conflict with the darker evils that lurk in the shadows of Academy City.

A Certain Scientific Railgun is an ongoing manga spin-off and supplementary reading to the A Certain Magical Index Light Novel series written by Kazuma Kamachi which began in 2007. Unlike the main light novel series, the Railgun manga purely focuses on the science elements of Academy City, and not the greater Magic/Science conflicts of Index. However, there are side-story novels, included in the limited edition volumes of the Index anime, where Mikoto and her friends unknowingly encounter elements of the Magic side. The manga series currently has 16 volumes released, with five completed arcs and a sixth in progress. It later got its own Spin-Off A Certain Scientific Railgun: Astral Buddy that ran from 2017 to 2020, starring Hokaze Junko, the Number Two to Mikoto's rival Shokuhou Misaki. Starting in 2021, a sequel to this spin-off starring Misaki herself, A Certain Scientific Mental Out, began serialization. Railgun and Astral Buddy are localized by Seven Seas Entertainment.

Similar to its parent series, Railgun has received an Animated Adaptation courtesy of JC Staff. The first season debuted on October 2009, focusing on the Level Upper arc of the manga as well as some anime-original material penned by the author. A one-shot story set during this season was also released in October 2010 in the form of a half-hour OVA; unlike the TV series, this has not been licensed in the English-language market. A second season, A Certain Scientific Railgun S, aired in Spring 2013, focusing on the Railgun version of the Sisters arc and an anime-original plotline. A third season, A Certain Scientific Railgun T, aired in Winter 2020, following the third season of the Index anime and the Accelerator anime, adapting the Daihasei Festival and the Dream Ranker arcs. Along with Index, the anime is being licensed by Funimation entertainment, with Crunchyroll also providing a simulcast for the third season.

This series shares a character sheet with A Certain Magical Index.

Also, check out the franchise's other spinoff, A Certain Scientific Accelerator.

A Note on Timelines

Railgun takes place during the same time period as Index, and their respective timelines interleave with one another. The details differ somewhat between the manga/light novels and the anime.

In the anime, the timeline is similar but with some slight differences. A few scenes note (including Kongou's introduction) from Volume 8 of the Index novels (which were not in the Index anime) are placed in the Railgun anime's first episode (thus moving them ahead by a couple of months). Otherwise, roughly speaking: