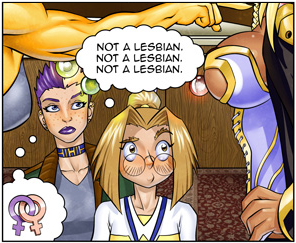 It's okay. We understand.
Homer Simpson: Okay, don't panic. Remember what the instructor said.
[Flashback of the ski instructor.]
Ski instructor: If you ever get into trouble, all you need to do is...
[Flashback changes suddenly to Ned Flanders in a form-fitting latex ski suit.]
Ned Flanders: [Wiggling butt] Feels like I'm wearing nothin' at all! [Close up of Ned's butt] Nothin' at all! [Closer close up of Ned's butt] Nothin' at all!
Homer: [Screams, cringes] Stupid sexy Flanders!
— The Simpsons, "Little Big Mom"

You are completely heterosexual, you are very much attracted to individuals of the opposite sex and you certainly aren't gay. But, you know, there are some examples of the same sex whom you can't help but admire. You can appreciate good looks and a sexy body regardless of gender. If taken far enough you just might say something that sounds wrong even in context. Indignation usually follows.

This often doesn't mean anything significant regarding your overall sexual orientation, though often you are just as caught off guard as the people around you. When applied to specific individuals who tend to provoke this response to people in general, see Even the Guys Want Him and Even the Girls Want Her.

If done enough times as a Running Gag, writers actually planning to out a character later can use this as foreshadowing. In some of these cases, this may be caused by a Closet Key. If it's taken seriously but isn't a set up for a reveal about the character's sexuality, it can sometimes lead to If It's You, It's Okay.

Nearly all Wholesome Crossdressers, and many Bifauxnen are subject to this gag at least once.note The "It's a Trap" internet meme is often used to refer to characters who cause this in audience members. Occasionally, the "victim" is given peace of mind by discovering their totally platonic (really!) crush is really Sweet Polly Oliver.

This is Truth in Television, with women being much more open about it. Quite frankly, if a guy were to say something like that to another, more often than not, the response would be, "What are you, gay?" Contrariwise, gay men are generally more likely than lesbians to joke about who they would switch teams for. When straight men do profess attraction to other men, it often takes the form of Gay Bravado—the concept being that they're not really attracted to guys, they're just so straight they're not scared to pretend they are (or alternatively, so comfortable with their mostly-straightness that they aren't afraid to admit to occasional "lapses").

Trope Namer comes from one of Homer Simpson's quotes from The Simpsons. While he's attempting to recall his skiing lessons, his mind shifts to a skin-tight ski-suit-wearing Ned Flanders moments prior, who waggles his buttocks while exclaiming the suit makes it feel like he's "wearing nothing at all". Cue Squick from Homer and the trope invoked.

The term "GAR" (always in capitals) is memetically used to describe a male character who induces this through sheer badassery and Hot-Blooded-ness. This term originated on 4chan's /a/, originally describing the character Archer from Fate/stay night.

Compare Dude Looks Like a Lady, Gay Moment, Even the Guys Want Him, Even the Girls Want Her, Ho Yay, Inconvenient Attraction, and Bi-Wildered. See also Stupid Sexy Friend.

The Trope Namer, in all it's stupid sexy glory!

The Trope Namer, in all it's stupid sexy glory!