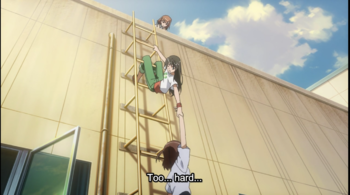 There has to be an easier way to hang with your friends...
"Did you forget how physics works?"
— Samala Gerrast, Legend of the Gray Jedi
Advertisement:

Contrary to what Hollywood would have you think, saving someone from falling is not as easy as grabbing them when they're already falling. Even if they're smaller and lighter than you, odds are their momentum will pull you down with them, or at least seriously injure your arm.

It should be noted that catching someone while standing on the ground doesn't count, only catching someone from an elevated position that should result in you being injured and/or pulled down with them.

Justified if the catcher has Super Strength or a similar ability, or possibly if Cartoon Physics applies.

Sister Trope to Not the Fall That Kills You…, which focuses on the falling person.

Compare Catch a Falling Star, in which the catcher also is moving, and Giant Robot Hands Save Lives, where the catcher's size tends to make the catch more plausible.