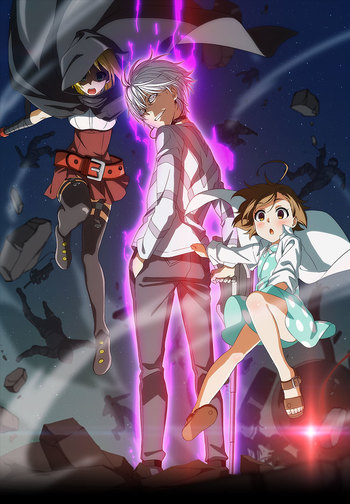 Welcome to the dark side.note  From L-R: Esther Rosenthal, Accelerator, Last Order
"This is a fight between villains. You're not a villain, so stand back and stay quiet."
— Accelerator
Advertisement:

A Spinoff of A Certain Magical Index, first released on December 27, 2013 in Japan before it was released overseas in various languages. It ended serialization on July, 27, 2020.

Accelerator is the most powerful Esper in Academy City, a state-of-the-art city dedicated to the scientific study and development of Psychic Powers. Every student in Academy City is given an "Esper Rank" to indicate their power, and Accelerator is a Level 5: the best of the best, with the power to manipulate the vector values of anything he comes into contact with, such as speed and direction.

During the events of A Certain Magical Index, he became the centrepiece of a murderous experiment to transform him into the world's first Level 6 Esper. He was ultimately defeated by Touma Kamijou, and following the cancellation of the experiment and a lot of soul-searching, he set out on a path of redemption.

This manga spinoff is an original side-story written by Kazuma Kamachi. It is the second spinoff, after A Certain Scientific Railgun. Unlike Railgun's strict focus on the science elements, magic does play a major role in the first story arc. Continuity-wise, it begins sometime between Light Novels 7 and 8 of A Certain Magical Index, before ending in the middle of the 8th novel.

It has twelve volumes published under Dengeki Daioh. A 12-episode anime adaptation by JC Staff aired on Summer 2019, adapting the Necromancer Arc, made up of the first seven volumes. Like its sister series, it has a simulcast available on Crunchyroll and a dub planned by Funimation released on July 26, 2019.