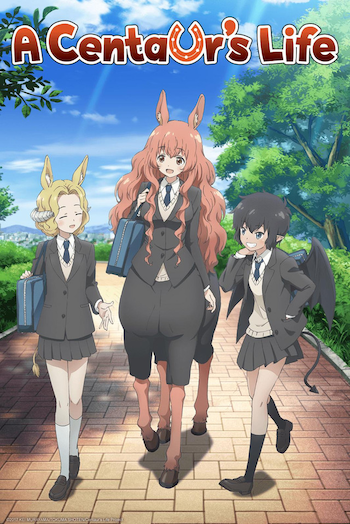 Himeno Kimihara is a rather shy but friendly Japanese high school girl, the only daughter of an average middle-class family. She goes to a normal high school, hangs out with her close friends Nozomi and Kyouko, and generally has the same dreams and worries a girl her age is expected to have — like falling in love or simply mulling about whether or not she overeats everyday.

However, Himeno also happens to be a centaur. This in itself isn't much of a big deal though, when literally everyone else on the planet display characteristics that might mark them strange if they lived on our world — like wings, tails, and animal ears.

Written by Murayama Kei and serialized in Comic Ryuu magazine since 2011, A Centaur's Life (Centaur no Nayami セントールの悩み lit. Centaur's Worries) follows Hime as she experiences first-hand the highs and lows of being a teenager along with her friends.

Although at first glance just another Slice of Life series that replaces humans with fantasy races, it soon becomes apparent that the author put a lot of thought into figuring out just how such races would act, live, and even interact with each other in a contemporary setting. The Worldbuilding is impressive, to say the least, and likely the main draw to non-Slice of Life fans.

The manga is being released in North America by Seven Seas Entertainment. An anime

began airing during the summer 2017 anime season. It is available for legal streaming with subtitles on Crunchyroll here

A Centaur's Life gives examples of the following: