Manga / Children of the Sea 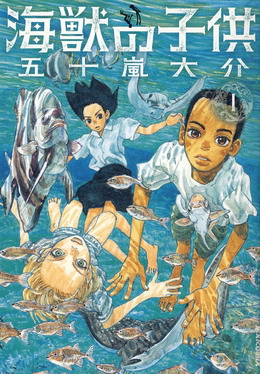 Children of the Sea is a Seinen manga by Daisuke Igarashi, which ran in Monthly Ikki from 2005 to 2011. Not to be confused with the Black Sabbath song.

Ordinary grade school girl and Tomboy Ruka finds herself thrown into an increasingly bizarre quest along with two other boys, Umi and Sora. Rather than the normal summer she might have wished for, she ends up caught up in the midst of what might be a massive mythological quest involving the origins of the boys and what the sea really is. Others interested are Jim, a tattooed surfer with a mysterious past, as well as Anglade, a young prodigy and scientist. Along with a lot of the scientific community at large, they seek to find out why aquariums around the world are losing fish under strange circumstances, as well as the other unique phenomena the boys appear to be causing.

A film adaptation by Studio 4°C under the direction of Ayumu Watanabe and with music by Joe Hisaishi released on June 7, 2019 in Japan. GKIDS has licenced the film for release in the U.S. with plans to screen (in both Japanese and English) later in 2020, and Madman Entertainment has picked up the Australian & New Zealand rights, premiering it at the Sydney Film Festival on June 15, 2019.

Tropes present in Children of the Sea: