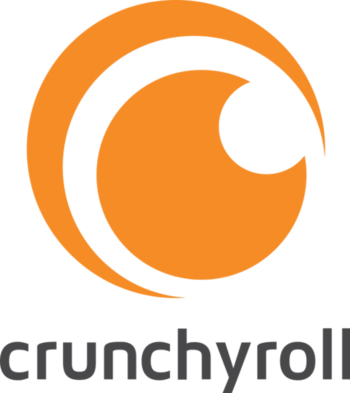 is a video streaming site with a focus on anime, as well as being a licensor.

Crunchyroll offers over 200 anime shows and more than 200 Asian dramas to users, although not all programming is available worldwide due to licensing restrictions. The site also has a growing number of manga titles available, but they're for premium users only.

On July 1, 2016, at Anime Expo, Crunchyroll announced that would start to do its own home video releases for some of their licensed titles, and that it would be commissioning dubs for them as well

. Two months later, on September 8, they announced that they entered a deal with Funimation, in which they would allow cross-streams for shows both companies had licenses to, and that Funimation would handle home video releases, in addition to also creating dubs for them

Two years later, on October 18, 2018, Crunchyroll and Funimation announced the formal end to their business partnership

. This was mainly because Funimation was acquired by Sony Pictures, while Otter Media became a wholly-owned subsidiary of WarnerMedia after AT&T bought out all remaining ownership stakes in August 2018, including that of The Chernin Group. Under their owners, a curated selection of Crunchyroll licensed anime was also made available on HBO Max. As for home video releases, Crunchyroll announced in September 2020

they would work with Sentai Filmworks.

And then, in December 2020, it was announced

that Funimation's parent company Sony Pictures would acquire Crunchyroll for $1.175 billion, as part of AT&T's efforts to sell non-core assets in an effort to pay down debt. The sale was completed

that Funimation would undergo a rebrand as Crunchyroll, LLC and their content would move over to Crunchyroll. In August 2022, Crunchyroll acquired

Right Stuf Inc. and most of the divisions under its umbrella, such as Nozomi Entertainment.

While mainly being a licensor of anime, Crunchyroll has been part of production committees of some titles, including The Rising of the Shield Hero, Magical Girl Ore, and Magical Girl Raising Project. Crunchyroll would later place titles they either co-produced or directly produced under their Crunchyroll Originals banner and has been collaborating with then-corporate sibling Adult Swim on some of these titles.

VRV, an over-the-top streaming service launched in 2016, also features Crunchyroll as a channel.