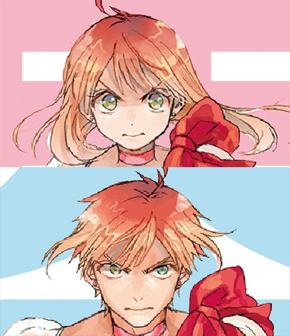 Not quite the right kind of Earth Defense.
Magical Girl Ore is a two volume comedy manga by Mokon, with its own rather… unique take on magical girls.
Advertisement:

Saki Uno is a hard sell. She’s a rookie teen idol, performing with her childhood friend Sakuyo and barely making a dent in sales. Their singing’s bad, their dancing’s worse, and nobody comes to their concerts. Her crush on Mohiro, Sakuyo’s elder brother and one half of the bestselling unit STAR RICE, motivates her to get to the top to meet him eye-to-eye. But when Mohiro gets taken away by strange creatures, Saki decides to take action by making a (somewhat unwilling) pact with a shady man who claims he can give her the power to become a magical girl. Calling upon her love for Mohiro, Saki gains the strength that she needs to save him — only to find that becoming a magical girl isn’t exactly what she thought it’d be.

The manga ran from 2012-2014 in Comic Be, with an anime announced in its last year. While development on the show stayed silent for some time, it resurfaced in 2018 for an April release. Crunchyroll has the licence for the adaptation and even did a special 2-episode preview a week before launch, streaming the first episodes on March 26, 2018.

Several weeks after its adaptation began airing, the manga returned to the pages of Comic Be in the form of a sequel.