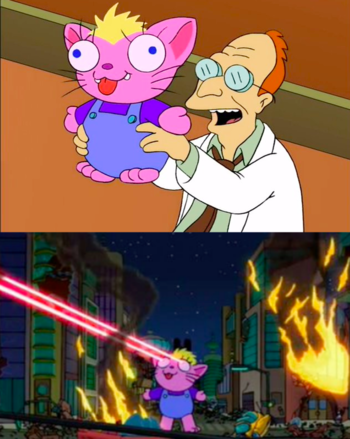 Sometimes, horrifically dangerous objects are obvious; nasty-looking spikes, painted dark and foreboding colors, covered in Schmuck Bait, and generally like something straight from a 12-year-old's Dungeons & Dragons game. However, sometimes it looks like a cute kitten statue.

Aww... nothing that cute could be dangerous. Until it comes cutely to life and uses its precious widdle claws to rip your face off. Adorably.

A Happy Fun Ball is something extraordinarily dangerous that looks innocent. It might destroy the universe, or it might rip a single person to shreds while looking oh so precious. A living version of a Happy Fun Ball is a Killer Rabbit. Supertrope to My Little Panzer, "toys" that are too dangerous to be toys. May overlap with Hidden Weapons.

Contrast with Nerf Arm, which is only potentially dangerous because of who uses it, and Improbable Weapon User, the one who uses it. Compare with Excalibur in the Rust, which is also about weapons that don't look like much at first (due to looking old and/or broken), and Shoe Phone, gadgets and knickknacks hidden inside innocuous objects. See also Lethal Joke Item for the video game equivalent, Super-Fun Happy Thing of Doom, and The Not-So-Harmless Punishment.

Not to be confused with a Hyper-Destructive Bouncing Ball, though it might well be one.

The Happy Fun Ball seems great until you listen to the side effects.

The Happy Fun Ball seems great until you listen to the side effects.