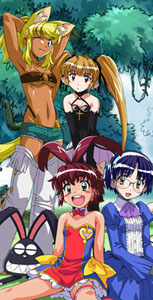 Magical Pokaan, a 12-Episode Anime from 2006, is to fantasy what Galaxy Angel is to science fiction. The setup is that four princesses from the Netherworld are sent to Earth to figure out the way humans live. From there, it's all about the comedy. There's Liru, the werewolf, who turns into a cute puppy at the sight of anything that resembles the full moon... except for, oddly, the full moon; Pachira, a vampiress who really wants a larger bust size; magically incompetent Yuuma; and Aiko, a gynoid whose technical data makes your old 2.4GHz Pentium Dual Core look like something from a Sufficiently Advanced Alien. There's also their nanny/chaperone, the invisible Keimie, who is mostly either absent or silent for the most part.

Now if only their recurring nemesis Dr. K-ko learned that these girls aren't harmless at all...

If you enjoyed Galaxy Angel, Magical Pokaan is a short, sweet, fun ride.