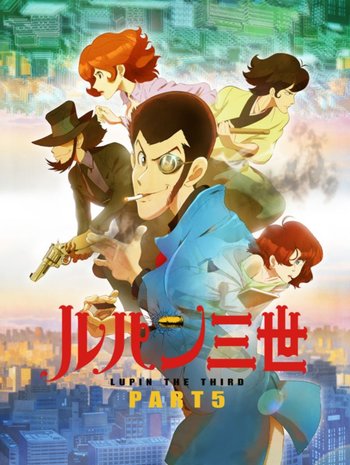 Lupin III Part 5 is, as the name implies, the fifth installment of the main Lupin III series.note technically the sixth if you count the spinoff, The Woman Called Fujiko Mine It follows on directly from 2015's The Italian Adventure (a.k.a. Part 4).

Some time after his adventures in Italy, Lupin sets his sights on the greater treasures of France. Of course, in doing so he gains the ire of some very dangerous people and soon finds himself up against a figure of his past as well while trying to stay alive and uncovering long buried secrets in the process. Secrets that could spell trouble for the nation in the wrong hands.

Lupin once again dons the blue jacket first seen in the The Italian Adventure, making this the first time Lupin retains his jacket color from a previous, mainline series note Lupin did wear his original green jacket from the first series in The Woman Called Fujiko Mine.

The series, slated for 24 episodes, premiered in April 2018 with TMS Entertainment once more providing the animation. Its setting and storylines are greatly modernized compared to most prior Lupin outings; Lupin now uses a smart lens which allows him to hack security systems, and there is a heavy focus on recent technological trends such as cryptocurrencies and social media.

Now has a Character page for those introduced in this series.