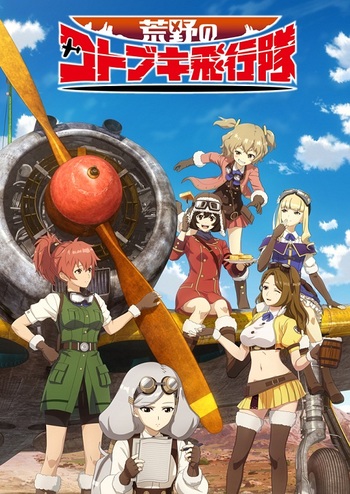 Kotobuki Squadron, fly high!note From left to right: Kylie's Nakajima Ki-43-I Hayabusa, Leona, Kate, Kylie, Chika, Zara, and Emma
"Long ago, the world opened right up, and lots of things rained down on us. Some good things. Some bad things. Some lovely things. Some tarnished things. There was all sorts of things. But since then, things had closed up again. And now, while we slowly lose many of things that we have... We still live on."
— Kylie, narrating about the Yufang hole.
Advertisement:

In Ijitsu, the world is an endless expanse of wasteland where people are struggling to live their life. One day, 80 years ago, the world opened up right on everyone, and many things came out of the hole. Among those things was the 'Yufang', a mysterious group of people who brought with them the marvel of aeronautical technology. Yufang shared their knowledge with Ijitsu, improving their livelihood with the use of airplanes.

However, a decade later the Yufang suddenly disappeared, returning to whence they came, leaving Ijitsu fending for themselves with all the technology they were given to without really understanding the Yufang and their motive. Aviation culture flourished, but the depleted resources in Ijitsu caused conflict among the people. Sky pirates appeared among these starving populace and cargo companies started employing mercenary flight squadrons to fend them off.

In a barren frontier where people trade goods with each other in order to help each other survive, the Kotobuki Squadron are bodyguards for hire, led by a strict but beautiful squadron leader, an unreliable commanding officer, and a true artisan of a crew chief. Alongside pilots who don't lack for personality, they take to the air in dogfights, letting the engine noise of their Hayabusa fighters ring out in the skies.

The Magnificent Kotobuki (Kouya no Kotobuki Hikoutai, literally "The Kotobuki Squadron in Wilderness") is an original anime based on an upcoming mobile game The Kotobuki Squadron in Wilderness: Take Off Girls in the Sky, directed by Tsutomu Mizushima and animated by GEMBA and WaoWorld* with Actas and The Answer Studio for the latter half of the series, premiered on January 13, 2019. The game was launched on February 13, 2019 and focuses on other flight squadrons besides the Kotobuki as they live their life in the chaotic and lawless Ijitsu. A sequel gaiden miniseries focusing on the Harukaze Squadron from the game, Harukaze Squadron in the Sky, premiered on April 10, 2019 and can be viewed in the Official Youtube channel

. The manga adaptation, starts from the mission of which Kylie joined the Kotobuki Squadron, was released in April 23, 2019 in Shounen Jump + here

In many ways a Spiritual Successor to both Girls und Panzer and High School Fleet.

Emma doesn't even need to get her words out; her body language automatically gives her intentions away.

Emma doesn't even need to get her words out; her body language automatically gives her intentions away.