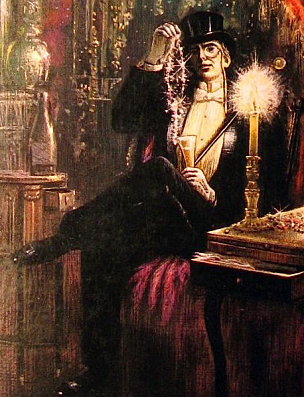 There is, in the gallery that connects your two living-rooms, a picture by Philippe de Champaigne of great appearance which pleases me immensely. Your Rubens also attract my eyes, as well as your smaller Watteau painting. For this time, I shall content myself with these objects which will be, I think, of easy concealment and resale. I ask you therefore to have them properly packed and to send them to my name (carriage paid), at the Gare de Batignolles, within eight days. If you fail to satisfy this request in time, I shall proceed with their removal on the night of Wednesday, the 27th of September.
— Classic letter from Arsène Lupin. Calling police after reading is heavily disadvised.note Not that it would matter. Odds are he sent them a copy of the letter.
Advertisement:

Maurice Leblanc's 'Gentleman Thief' who is part crime-solving (and crime-committing) mastermind, part prince of romance and the Trope Codifier of Phantom Thief, first appearing in novels and short stories, starting in 1905. The Lupin stories were meant as a reversal of the detective stories that were massively popular at the time — Lupin is instead the criminal. Stories tend to vary from following various detectives in their attempts to stop Lupin or figure out what he did, to Lupin facing other villains. Other stories even have Lupin looking for lost treasures. Part of the books' success is due to Lupin's status as a Master of Disguise: When opening a book, one is never sure WHO is Lupin in this story. Is he the victim's guest? The Detective's assistant? The narrator himself? Lupin's status as a criminal is balanced by his trademark gentlemanly behavior, allowing him to come off as heroic rather than a villain, though his actions do often earn him a fair share of What the Hell, Hero?.

He has had his own films/series, and is the principal character of Night Hood, a Canadian-French animated collaboration that aired on YTV in the 1990s, a 1970s French live-action show, a Filipino TV series (more inspired by his grandson but still using the original Lupin). Lupin is the Trope Namer and Trope Codifier for the Gentleman Thief, a significant influence on those who followed in his footsteps.

Notable amongst them are:

In case you didn't notice from the large amount of works produced there, Lupin is an incredibly popular figure in Japan. In fact, many modern fans mostly know of Lupin because of the many popular Japanese works inspired by or based on him.