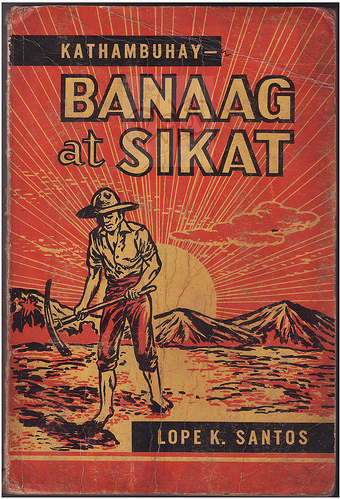 Banaag at Sikat, variously translated in English as "From Early Dawn to Full Light", or more recently "Glimmer and Sunrise" or "Radiance and Sunrise", is a 1906 Tagalog-language Filipino novel by journalist, labour activist, intellectual, and politician Lope K. Santos (the "K" is pronounced "Ka"). In the Philippines it is considered the foundational socialist novel, or at least the first national novel to discuss and promote workers' rights and Socialist and related ideologies to improve the lot of the country, and in particular its proletariat. Interestingly, it was published the same year as The Jungle by Upton Sinclair.

Santos initially wrote what came to be a huge Doorstopper of a novel in installations: prior to its 1906 publication it was serialised weekly from 1902 to 1904 in Muling Pagsilang, the Tagalog version (which he also put out) of the then-circulating El Renacimiento, a Spanish-language, radical-nationalist and anticolonial paper that would later be sued by American colonial officials for libel. The political atmosphere in which he was writing was a very volatile one: the Philippine Revolution to throw out the Spanish colonisers had come and gone barely a decade prior, from 1896-1898, after which American forces invaded Manila—ostensibly to help the Filipino Revolutionaries fight Spain, but in the end buying the entire Philippine archipelago direct from Spain behind their backs, and then turning on the Revolutionaries themselves. Thus ensued the long, bloody, and heavily lopsided Philippine-American War, which the Americans declared over by 1902, but which still continued to flare up for nearly another decade, mostly in the form of U.S. forces (and their newly client Filipino police, the Philippine Constabulary) hunting down what to them were mere "bandits", "savages", "insurgents" or "terrorists", but were just as often remnant revolutionary guerrilla units or messianic peasant movements still attempting to throw off American colonial rule.

Meanwhile, in the largely "pacified" (i.e., U.S.-colonised) cities like Manila, armed conflict had given way to popular elections, politicking, street protests, and organised demands for fair treatment, workers' rights, and immediate or at least guaranteed eventual independence, whilst American authorities and supportive Filipino lackeys denounced all these while rolling out and managing the products of "benevolent assimilation", like English-language public education, modern infrastructure and utilities, urban planning and public-health programs. In this first decade of American rule, Santos latched onto the popular demand for labour rights, and reading and learning from European Socialist and other Leftist thinkers like Karl Marx, Enrico Malatesta, and Mikhail Bakunin, as well as compatriots like labour leaders Isabelo delos Reyes and Dominador Gomez, he decided to put down his reflections in the form of a serialised novel, weaving in discussions of Socialism, class struggle and inequality, into a melodramatic, teleserye-esque plot filled with romance and family drama as much as it's filled with political agitation.

In December 2021, a modern English translation came out under the title Radiance and Sunrise, created by author and literary academic Danton Remoto for Penguin Southeast Asia.