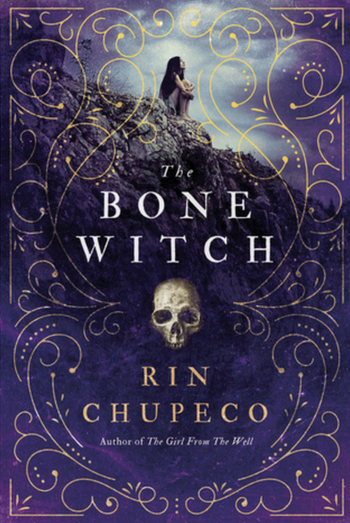 Let me be clear, I never intended to raise my brother from his grave...
Advertisement:

A Dark Fantasy Young Adult trilogy by Rin Chupeco, set in the Eight Kingdoms, a world where terrifying monsters known as Daeva periodically awaken from their slumber and rampage. Daeva can be fought only by those with great magical power; most commonly, by elemental witches known as Asha or elite soldiers called Deathseekers. Only the rare Dark Asha, or Bone Witches, can mentally control Daeva; Dark Asha are therefore considered the ideal Daeva-slayers, despite their low numbers.

The books are narrated by Tea, an exiled Dark Asha who summons a wandering bard to hear her tale. The story mainly consists of Tea's recollection of her work as an Asha and fall into darkness, with Flash Forwards between chapters depicting Tea's present-day fight to fix the broken elements of the Asha system and Eight Kingdoms society, by brutal means if necessary.

The first book, The Bone Witch, was released in 2017; it details Tea's training as an Asha and her struggle to understand both her powers and the intricate workings of Asha society. The second book, The Heart Forger (2018), focuses on Tea and her friends' efforts to fight the evil Faceless and their machinations, with additional focus on romance and Tea's exploration into the darker side of her powers. The third book, The Shadowglass, is slated for release in March of 2019.