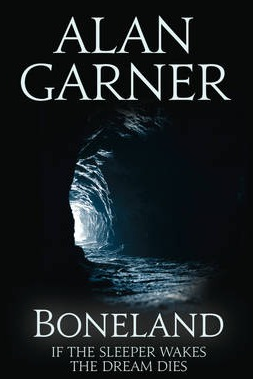 But at my back in a cold blast I hear
The rattle of the bones
— "The Waste Land", by T. S. Eliot
Advertisement:

The final book in a trilogy by Alan Garner, Boneland concludes the story that began over fifty years ago in The Weirdstone of Brisingamen and continued in The Moon of Gomrath.

Professor Colin Whisterfield is a brilliant academic and polymath, described as a high-functioning Aspergers case. He spends his days at Jodrell Bank, using the radio telescope (officially) to study constellation M45 for its scientific interest. Unofficially, he is using it for a completely unorthodox purpose he professionally needs to keep secret. There are grave doubts as to his sanity and he is on serious medication for psychiatric purposes. Running out of ideas, his doctor refers him to a gifted but seriously maverick psychiatrist. She has it in her favour that she is also a genius psychotherapist.

At the same time, and in another time, the Watcher cuts the rock and dances, to keep the sky above the earth and the stars flying.

Colin can’t remember; and he remembers too much. Before the age of twelve years and nine months is a blank. After that he recalls everything: where he was, what he was doing, in every minute of every hour of every day.

Magic and mysticism meet science, art and religion as Colin begins to disentangle the trapped and seemingly lost events of his childhood.

Tropes which may or may not manifest in this book, and dance on the edge of awareness in a tantalisingly ambiguous way in which Quantum may show itself, include the following. Or may not. Or maybe.