Film / Yor: The Hunter from the Future 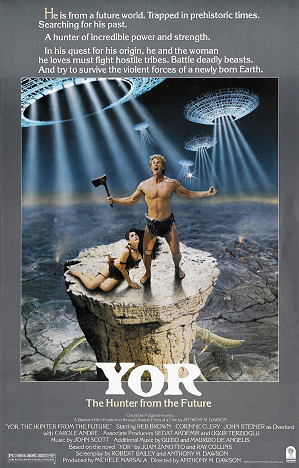 Yor, the Hunter from the Future, also known as Yor's World, is a film released in 1983. It was directed by the famous Italian B-movie director Antonio Margheriti and starring Reb Brown of Space Mutiny fame. The setting is a mixture between prehistoric and futuristic, borrowing elements from numerous popular franchises of the time. It has a growing cult following.

The movie opens with Yor (Reb Brown) jogging around the stone towers of Cappadocia, Turkey while a very cheesy rock ballad plays in the background. In a nearby village, Kala, a seemingly primitive cave-woman, and her older protector Pak are hunting. Suddenly, they are attacked by a triceratops. Yor appears out of nowhere and kills the dinosaur with his axe. He is befriended by the village and together they cut the choice meats to be feasted upon in a celebration.

While Yor is there, a band of cavemen with bluish skin attack the village, and only Yor and Pak escape. Yor immediately swears to get Kala back, so Yor and Pak track the blue cavemen to their lair where Yor shoots a giant bat with his bow and arrow. He then uses the dead bat like a hang glider to storm the lair and sneak out the back with Kala before flooding the cave and drowning all the captives... yes, you read that sequence of events correctly.

Kala and Pak decide to follow Yor in his adventure to find his origins. Along the way, they find a mysterious society of sand mummies, led by a blonde woman with an amulet similar to Yor's.

Eventually, Yor (in an effort to discover his true origins), makes his way to an island surrounded by storms. There he discovers that his parents were from a small band of nuclear holocaust survivors. An evil man named the Overlord has taken control of the remaining nuclear technology with his android army.

The 90-minute movie of Yor that most viewers know of was edited from a four-episode Italian TV mini-series. Entertaining reviews by The Spoony Experiment (here

) and Something Awful (here

) share a general sense that when the movie is bad, it's almost insultingly stupid — but when it's good, it's fantastically stupid.

"We will need a lot more tropes before we're through.":