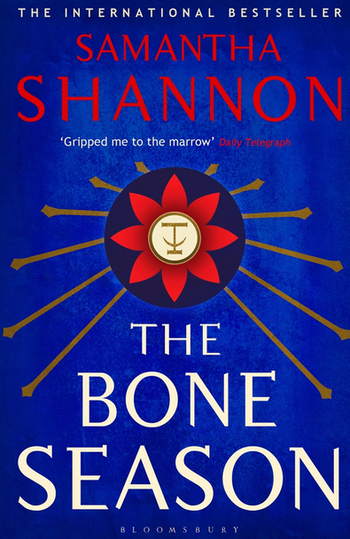 There is no safer place than Scion.
"You know reality? Forget it. Sheol I has its own rules. Accept that now, and everything will be easier."
— Liss Rymore
Advertisement:

The Bone Season is the 2013 debut novel of author Samantha Shannon, the first in a seven-book series. Set in a Dystopian, Alternate History England, the story follows a young clairvoyant woman named Paige Mahoney. Since 1859, when the phenomenon of clairvoyance first became public knowledge, England has operated under an oppressive and strongly anti-voyant government called Scion. Paige belongs to a class of criminal voyants who use their contact with spirits and the spirit world (known as the æther) to make a living while avoiding the authorities. She is a rare kind of voyant known as a dreamwalker, capable of separating her spirit from her physical body and entering the æther in spirit form.

One night, Paige is subjected to a spot check by government agents and accidentally kills one with her gift. She is arrested that very night and transported to the city of Oxford, which is home to a secret penal colony called Sheol I. The penal colony is run by a race of supernatural creatures known as Rephaim, who arrived on Earth two hundred years ago through a rift in the æther, along with man-eating monsters called Emim. The Rephaim have a deal with Scion: in exchange for protection from the Emim, Scion must send a number of voyants to Oxford every ten years. These decadal harvests are known as Bone Seasons.

Upon their arrival in the penal colony, every voyant is assigned a Rephaite keeper and taught to fight the Emim as part of a penal battalion. Paige is chosen by a Rephaite called Arcturus Mesarthim, known as the Warden, who has never previously shown interest in humans. If she wants to escape the penal colony and return to London, she must learn how to survive in her new environment ... and figure out her keeper's mysterious motives.

If you're looking for the sequels, please select one of the following:

To return to the general page for the Bone Season series, click here.

For character-specific tropes, please go to the character page for this series.

No matter how much I sometimes wanted it, there was no such thing as normal. There never had been. "Normal" and "natural" were the biggest lies we had ever created, we humans with our little minds.