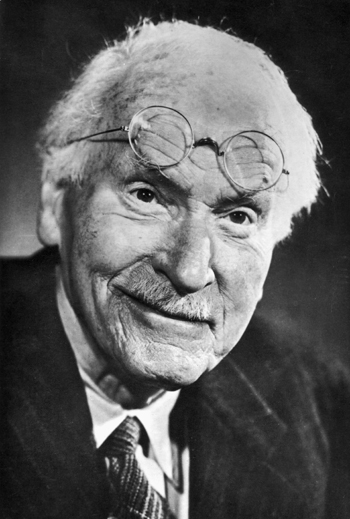 "All the works of man have their origin in creative fantasy. What right have we then to depreciate imagination?"

Carl Gustav Jung (July 26, 1875 — June 6, 1961) was a Swiss psychologist. He was, next to Sigmund Freud, arguably the most influential psychologist of the 20th century, at least in the arts and humanities. He started his career as Freud's protégé, but the two eventually fell out over differing views on the unconscious, as well as Jung’s seduction of one of his patients, Sabina Spielrein, who he also tried to mentor as a psychoanalyst. He then lied to Freud about the circumstances, which greatly upset the latter when he learned the truth.

Jung was born to a religious family of Lutherans. His father was a pastor, as were several of his uncles. He defied his family to go into a clinical profession where he treated cases of women suffering hysteria. His treatment of these cases brought him into contact with Freud's writings and this started a personal and professional friendship between the two. Freud at that time was seen as an eccentric weirdo who was Jewish in a city and Empire that were Catholic. Freud believed that if the Swiss-Born Lutheran Jung endorsed psychotherapy, then it might become more mainstream and accessible. But it didn't pan out. Jung's personal conduct aside, he also started to question Freud's theories, in particular the importance of the sexual drive. Jung believed that the unconscious was the source of a higher understanding and meaning, while Freud believed that it would be incorrect to say what, if anything, the unconscious had. Rather, Freud believed that it was up to patients to find their own relationship and meaning via psychotherapy by discussing all the repressed parts of existence. Jung believed in a "collective unconscious"; he thought that, by accessing and accepting it, patients could resolve their problems. This led Jung to form his own school of thought: Analytical Psychology.

Jung pioneered a number of groundbreaking ideas in psychology. Chief among them was the idea of the Collective Unconscious, a deeper level of the human unconscious wherein are found the archetypes — primordial psychological forms that exist in everyone's psyche. This means that while every single conscious mind is unique, every human being has the same primordial motifs inherent since birth (similar to tropes, only deeper and more mind-boggling). Having rocked the world of psychology with his radically different interpretation of the psyche, Jung then went even further. Freud believed that all psychological neuroses could be dealt with by unearthing repressed thoughts causing them. Jung argued that neuroses arise through a lack of individuation — the process of assimilating the conscious and unconscious to form a "psychological whole" while maintaining their precarious balance. It is a process of transformation from an unhealthy, neurotic mind into a healthy, enlightened psyche that has gained knowledge of the self. Freud felt that this idea was at its core religious and not scientific. Freud disagreed with Jung's emphasis on religion and mythology, given that he was a committed atheist who regarded religion as merely a flight from dealing with real problems. Freud's own later works, chiefly "group psychology" and his studies on religion, anthropology, and human society (in Civilization and its Discontents) show him dealing somewhat with Jung's field of inquiry but with an entirely different and more skeptical emphasis.

On account of outliving Freud greatly, Jung was altogether more famous, successful, and influential among the public. He spent much of his life exploring mythology and philosophy, especially comparing Eastern and Western ideas. Fittingly, Jung's idea of the archetypes had a huge impact on the study of myths. Joseph Campbell freely admitted that Jung's ideas were instrumental in his formulation of the Hero's Journey. Jung also spent much of his life exploring and discussing spirituality, alchemy, and astrology, being especially intrigued by meaningful coincidences, for which he coined the term "synchronicity" — a term still widely used in various spiritual and occult circles. When he was 38, he had a "confrontation" with the unconscious. Fearing he might be going mad, he decided to "induce hallucinations" and record the workings of his imagination. The results were released decades later as the Red Book, a lavishly illustrated compendium of psychedelic paintings and calligraphic text.

Due to all this, Jung is perhaps one of the few people who can be classed as Mad Artist, Mad Scientist, and Mad Doctor. Or, alternatively, a 20th century Renaissance Man. The Mad part cannot be de-emphasized however. During The '30s, Jung participated in a conference and publication of a psychoanalytical journal by an organization of German psychologists who were loyal to the Nazi regime. In addition to that, he made a number of pro-Hitler

and pro-Nazi statements. On the other hand, Jung was kind to Jews on a personal level and counted Jewish friends. Yet when many of them were being persecuted in Austria and Germany, Jung generally did not speak out or denounce Nazism and its ideology.

Jung's impact was considerably more on the cultural field during his lifetime. Chances are, if a work has some psychological imagery, and it's not referencing Freud, then it's referencing Jung. His influence can be seen in TV shows such as Northern Exposure and The Sopranos, artists such as tool, Peter Gabriel, Billy Corgan, games such as Xenogears (as well as its Spiritual Successor Xenosaga), the Shin Megami Tensei series as a whole (even more so in the Persona Spin-Off), and Cunninlynguists, the films of Federico Fellini (who was under therapy by a Jungian analyst). He was famous enough to appear on the cover of The Beatles' album Sgt. Pepper's Lonely Hearts Club Band and The Police's album Synchronicity was influenced by Jungian's theory on synchronicity.

In fact, it's possible that TV Tropes itself owes its existence to Jung's work. Perhaps we should call him "Trope Codifier Prime" for laying the groundwork of all that you read here while Wiki Walking through this site. At any rate, he forms, with Aristotle and Roger Ebert, the Trinity of Grand Tropemasters.

Jung's first years as a psychoanalyst, as well as his relationship with Freud, his extramarital affairs, and his emerging theories on the unconscious, are featured in the 2011 David Cronenberg film, A Dangerous Method, in which he is portrayed by Michael Fassbender.

On a semi-related side note, "Jung" is ROT13

for "What". Coincidence, or synchronicity?

Tropes common in his work include: