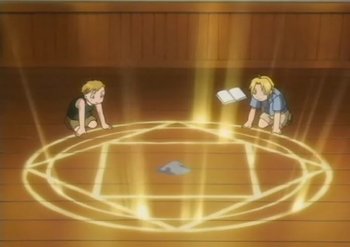 There's no way this could go wrong...
Hermeticism is a real-world philosophical, religious, and magical tradition

, claimed to be the human incarnation of both the Egyptian god Thoth and the Greek god Hermes, a Coptic Egyptian Gnostic who founded the theological and philosophical base of western alchemy. One of the oldest, most continuous, and pervasive of Western magical traditions, it also widely influenced early scientific thought as late as such greats as devoted alchemist Sir Isaac Newton. Alchemy in particular can be almost synonymous with Hermetic traditions and depictions of European, Armenian, and Islamic alchemy will usually represent these as being the same as a comparatively easy way to have Shown Their Work.
Advertisement:

The origin of the phrase "as above, so below", the tradition makes extensive use of Sympathetic Magic, often in more abstract ways. It is thus heavily reliant on either visual/material symbolism or even spoken forms. Other important core elements are seeking to understand Astrology, Alchemy as previously mentioned, and Theurgy. For some of the more common imagery check out a Rider-Waite

set of Tarot cards. This makes Hermeticism often a long drawn-out affair with lots of potentially flashy elements (or in other words, a very rich source of mystical imagery with at least some grounding in real beliefs).

These days, Hermetic magic is perhaps used more in anime than in Western works, typically either to provide a comparatively exotic European flair to contrast with local mysticism... or just because it looks cool, while in the West magic is often simplified to just a basic spell and effect with maybe one line of chanting and a circle of candles. This may be because talking about magic in too much detail might incite the Moral Guardians to launch a Witch Hunt accusing you of Satanism, or just because Western media is more likely to be live action. It being a pain in the butt to depict those fancy geometric designs when you can't just recycle animation and not end up with a Special Effect Failure. That said, Hermeticism has been around long enough to influence almost every aspect of Western magic, or at least share it with others such as use of pentagrams.

Expect to see The Seal of Solomon, the Kabbalah, Tarot cards, and the Enochian alphabet in works featuring Hermetic magic (the Paracelsian Alphabet of the Magi, less known by name, is nevertheless also likely to make an appearance).

A sub-trope of Ritual Magic. See also Instant Runes, Magic Is Mental, and Fantastic Science. Not to be confused with Sealing Magic.