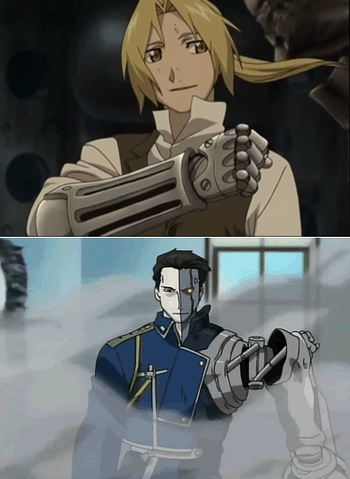 Top: Life or Limb Decision. Bottom: Cybernetics Eat Your Soul.
Ignis: I have doubts that you were born with a prosthetic.
Ravus: Your doubts are correct. I once believed it was I who was destined to dispel the darkness. This is proof I was wrong.
Final Fantasy XV Episode Ignis
Advertisement:

You can tell how good The Hero or bad the Villain is by how deep their scars were cut. Take it a few steps further and then imagine the kind of stories one can tell when they're missing a leg. Or two.

Artificial Limbs are commonly given to amputees to help them function pragmatically and to give them a sense of normalcy. Prosthetics can range from simple wooden legs and hook-hands, to robotic arms to even fully-functioning clone limbs made of artificial plasma-gel.

Heroic types usually try to make their arms and legs look similar to their original ones. If they could not put artificial skin of some kind on it, they at least try to make it look as unrobotic and nonthreatening as possible. Bad guys on the other hand try to make their robot arms and legs as bulky and obvious as possible, showing it off to show that they will NOT be a victim again, not unlike how one would brandish a gun in their belt to intimidate. At times they could even see their non-robotic components as a weakness, losing more and more of their humanity as they replace their bodies with soulless tech. Some really nasty types have artificial limbs with permanently-installed weaponry.

Another related pattern is how the character got the augments in the first place. Almost always the Good Prosthetic was installed either because of the medical necessity (replacing a missing arm) or without the consent of the recipient, while all cases of voluntary cybernetic enhancements result in Evil Prosthetic and are treated as the morally wrong thing to do and a slippery slope to even more body modifications.

Character Alignment may also depend on how they lost their limbs in the first place. They could have lost their legs saving a child from a drunk-driven truck, losing their eye trying to rob some old lady, or something as simple as losing a finger or five in the garbage disposal.