The Right Hand of Doom 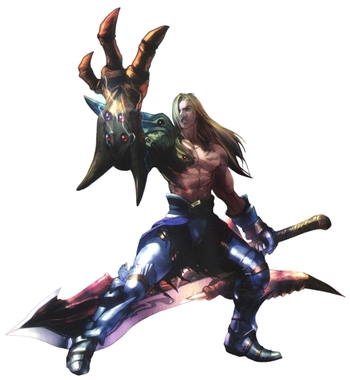 "Look at the size of that whammer!"
— American Soldier, Hellboy
Advertisement:

Symmetry has often been considered a crucial element of beauty and form. So when a character designer wants to go for something bizarre, distorted, gritty or badass, they will mess with the symmetry and one of the most common forms of Fashionable Asymmetry is to make one arm much bigger than the other.

It will still be an arm with a hand and digits but it will dominate the upper body and the size may be explained by some large glove-like piece of equipment or weapon. The creators may also decide upon whether or not to have the arm's considerable weight imbalance be acknowledged with the character walking with a slight shuffle or lean.

If this character is male, expect the fandom to immediately go for the obvious joke about how only one of his arms managed to get so huge.

Contrast with Red Right Hand, which, funnily enough, doesn't have to be a hand and is any mutation or defect used to denote an evil side. Not to be confused with The Left Hand of Darkness.

Wyzen of the Seven Deities is notable for his giant right arm.

Wyzen of the Seven Deities is notable for his giant right arm.