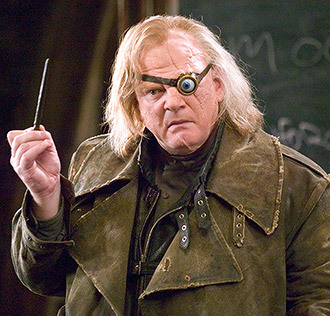 They don't call him "Mad-Eye" for nothing.
"My grandfather had two glass eyes, and yet he could see. What happened was, he sadly lost one eye (he wasn't careless, he was ill). And he had a glass eye made, exactly like his other perfectly working, blue Scandinavian eye. Then he had one made that was bloodshot, and it was known as "Grandpa's Party Eye". He kept it in a box on the mantelpiece, and when he went out for the evening, he'd take out the false blue one and put in the bloodshot one, and he'd say, "I'm going out now, and I shan't be back 'til they match!"
— Sandi Toksvig, QI, "Hypothetical"
Advertisement:

Glass Eyes are effectively a slightly more technologically advanced version of the eyepatch but without some of the pirate overtones. So they often get the overtones of the Eyepatch of Power. This particularly happens if the glass eye is designed to not match the other eye.

However, another common use of the Glass Eye is for comedy. The eye ends up being ill-fitting, constantly rolls around in the head, perhaps falls out and rolls around on the floor, leading to some slapstick runaround. A common variation for comedy purposes is to make the eyes wooden. It's just inherently funnier somehow, though you might get the common courtesy of a joke where the wooden eye is going along with a pirate's wooden legs and wooden arms and wooden... other bits. Mention must also go to the common joke format of Ignore the Disability, where people take great pains to try to not stare at the deformity.

See also Electronic Eyes for when the concept gets a futuristic upgrade with some more exotic connotations.