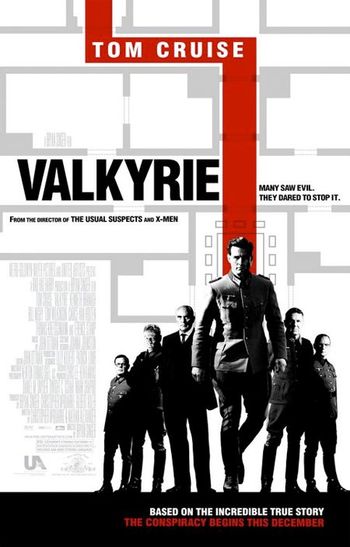 Nothing ever goes according to plan.
"It only matters that we act, now, before we lose the war. Otherwise, this will always be Hitler's Germany...and we have to show the world that not all of us were like him."
— Henning von Tresckow
Advertisement:

Valkyrie is a 2008 historical drama film about the attempted assassination

Part of what got interest in this film going is that popular consciousness has it that after 1933 there was no resistance within Germany to the Nazi party after the mass-arrests and exodus of the country's overt opposition to Hitler, in part because Hitler remained in power (and alive) until the Soviets took Berlin. Operation Valkyrie was actually the last of over 15 attempts (and one of the closest to being successful) on Hitler's life by various fringe factions within Germany before the end of the war. Even though the outcome of this assassination attempt is rather obvious, it serves as a reminder that the politics of Nazi Germany was far more fractious than it appears at first sight/from Middle- and High-School textbooks.

"Valkyrie" itself comes from the name of the prepared plan dictating the delegation of power that would transpire should Hitler die. The members of the plot had manipulated the Valkyrie protocol so that when Hitler died they would be able to unilaterally seize power with minimal infighting.

Not to be confused with the mythological characters from which this movie takes its name.

Stauffenberg starts out speaking German, but the language being spoken on-screen changes to English (text remains in German, however).

Stauffenberg starts out speaking German, but the language being spoken on-screen changes to English (text remains in German, however).