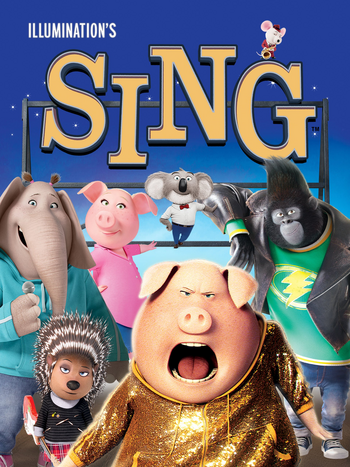 Sing is a 2016 computer-animated Jukebox Musical from Universal and Illumination Entertainment. The film was directed by Garth Jennings and Christophe Lourdelet, the former having previously directed The Hitchhiker's Guide to the Galaxy (2005), with Jennings also writing the screenplay.
Advertisement:

Set in a world populated by anthropomorphic animals, the movie centers around Buster Moon (Matthew McConaughey), an optimistic koala who plans on using a singing competition to save his struggling theater from being closed. The contest quickly attracts a big crowd of talented wannabes, such as the frazzled pig housewife Rosita (Reese Witherspoon), street musician mouse Mike (Seth MacFarlane), reluctant juvenile delinquent gorilla Johnny (Taron Egerton), teen punk girl porcupine Ash (Scarlett Johansson), and the ultra-shy elephant Meena (Tori Kelly). Buster is initially aided by his slacker sheep friend Eddie (John C. Reilly), but complicating things further is a typo in the original flyer: one that listed the award as $100,000 instead of Buster's meager $1,000...

A sequel, Sing 2, was released on December 22, 2021. All the main voices return with the exception of MacFarlane and Reilly. And newcomers Bobby Cannavale, Halsey, Pharrell Williams, Letitia Wright, Chelsea Peretti, Eric André, and Bono joined the cast.

Not to be confused with Sing, a live-action short film also released in 2016.