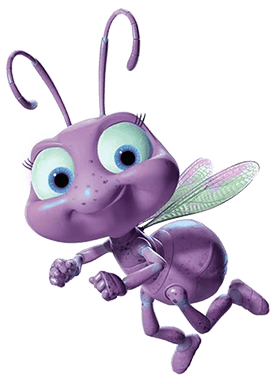 One convention animators made with insect characters was to draw them with only four legs, not the six legs they characteristically have. For example, the insect's front legs are hands and its hind legs are feet. One of the main reasons is that four legs are easier to animate than six legs and Law of Conservation of Detail comes into play. Another reason is that in a world of four-limbed mammals including humans, you'll want something for the audience to relate to in your characters and insects with their several limbs have a tendency to squick people out so you'll give them four limbs or instead double up some limbs so at least they function as quadripeds or bipeds.

One variant of this trope is to give decapods (ten-legged crustaceans) six or eight legs instead of the ten legs (including claws) that real world decapods have. Again, fewer legs mean less animation time. Another, less common variant that was more common in cartoons of the 1930s and 1940s was to draw spiders with six legs instead of eight. Scorpions, however, are still often drawn with six legs, perhaps because their pincers are easily mistaken for the fourth pair. In reality scorpions' pincers are not legs at all, but modified mouthparts called pedipalps. Strangely, octopuses are rarely drawn with less than their usual eight arms.

Sometimes this trope is inverted in which insects are depicted with eight legs and arachnids with ten legs.

Compare Four-Fingered Hands, which is based on the same principle. Contrast Vertebrate with Extra Limbs.