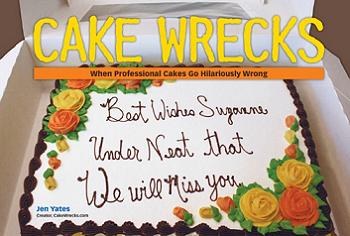 is a blog devoted to the collection of pictures of astoundingly ugly, poorly-made, or otherwise entertaining professionally-made cakes. Jen and John Yates, the married couple who run the blog, collect user-submitted photos and make a new post containing one or more cakes every day except Saturday. Sundays are devoted to "Sunday Sweets", cakes which are actually well-crafted and attractive, as an antidote to the weekday hideousness.

In the words of Jen, "A Cake Wreck is any cake that is unintentionally sad, silly, creepy, inappropriate — you name it. A Wreck is not necessarily a poorly-made cake; it's simply one I find funny, for any of a number of reasons. Anyone who has ever smeared frosting on a baked good has made a Wreck at one time or another, so I'm not here to vilify decorators: Cake Wrecks is just about finding the funny in unexpected, sugar-filled places."

Think of it as MSTing with baking.