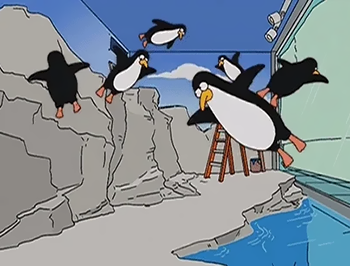 Babs: He must be very important to have his picture taken. What do you suppose he does?
Bunty: Isn't it obvious? He's a professional flying rooster. He flies from farm to farm, giving demonstrations.
— Chicken Run
Advertisement:

Not all birds possess the ability to fly; in fact, there's a good number of birds who can't. The specific reasons vary between each flightless bird, but the most common explanation boils down to their wings are not made for flying.

Despite this, there are plenty of times in media in which a bird that shouldn't be able to fly actually does. It could be just one of its kind, or the entire species. In any case, if you see any birds known to be unable to fly in any source of media showing the ability to fly, they belong on this list.

Note that if the flightless bird is using some sort of tool to fly (like an airplane or a jetpack), then it does not count since without it, the bird would truly be flightless.

While not completely flightless, chickens may also count for this list on account of how their ability to fly only gets them 10 feet off the ground. If the chickens can go any higher than that, they qualify.

Contrast Acrophobic Bird, for when birds who can fly don't fly for one reason or another.