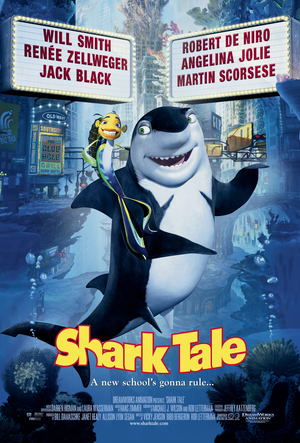 "Behind every little fish, is a great white lie..."
Michael: Well, what do you know about being a mob boss?
Homer: Everything! And I learned it all from the greatest gangster film ever: Shark Tale!
—The Simpsons, "The Mook, the Chef, the Wife and Her Homer"
Advertisement:

Shark Tale is a 2004 movie produced by DreamWorks Animation with probably the biggest ensemble cast in an animated DreamWorks movie (although Kung Fu Panda is close). Starring Will Smith, Jack Black, Robert De Niro, Angelina Jolie, Renée Zellweger and even director Martin Scorsese. Every character in the movie looks like a fish version of the actor voicing them.

This mafia movie, set in the world of saltwater fish, is the story of what happens when Frankie, one of the sons of shark crime boss Don Lino (De Niro) is killed by a dropped anchor, and a bottom-feeder named Oscar (Smith) is found at the scene of the crime. Hoping to win favor with the enemies of the ganglord, the fast-talking hustler poses as the killer known as the "sharkslayer", but soon learns it's a dangerous game in a world where the big fish generally eat the little fish...

It's basically what The Godfather would be, if there were talking fish and Will Smith.

Mrs. Sanchez: What're you still doin' here? Get outta here! Go home! It's past your bedtime!