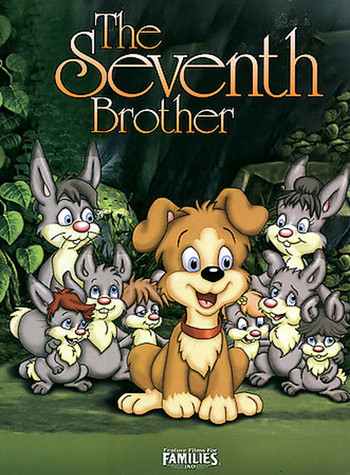 The Seventh Brother (also known as A Hetedik Testvér in Hungarian and Bobo und die Hasenbande in German) is a Hungarian/German/American animated feature made in 1991 in Hungary, 1992 in Germany, and 1994 in the United States.
Advertisement:

In the American dub, the story is about a little puppy named Tiny who is separated from his family, a young girl and her grandfather, during a thunderstorm as he chases after a frog when the car breaks down on the side of the road. Since his family believes him to be under a blanket in the front seat, they drive off without him, leaving Tiny to fend for himself.

This is only in the American version. However, in the original Hungarian and German versions, mind you, a mother, father, and daughter (who are never seen) are driving along only to stop the car and literally throw the puppy out over the ledge and into the forest before driving off again.

In all three versions, Tiny (whose name is Vacak in the Hungarian version and Bobo in the German version) is then taken in by six rabbit siblings who find him the next morning, and teach him how to be a rabbit, thinking of him as their seventh brother. However, not all the animals are happy that there is a dog in the forest...

All three versions have the same theme of bravery (as the rabbits and Vacak/Bobo/Tiny are thrown into many life-threatening situations, from hawks to drowning) and are filled with many songs.

Interestingly enough, this movie was given out in a promotion at McDonald's in The '90s, along with Willy the Sparrow and The Addams Family. This release titles it Tiny, The Seventh Brother and is otherwise identical to other releases of the English dub.

The film has a 1997 sequel called Tiny Heroes.

This Movie Provides Examples Of: