Animation / Son of the White Horse 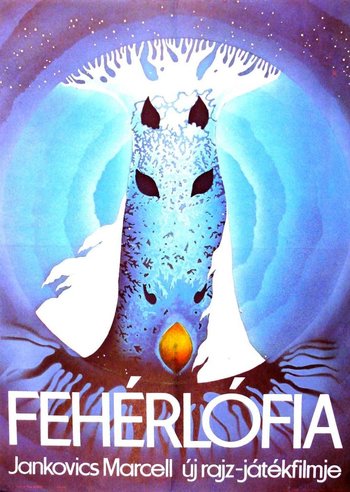 Son of the White Horse (Fehérlófia) is Marcell Jankovics's 1981 Animated Adaptation of steppe nomad legends and Hungarian folk tales (culled mainly from the collections of László Arany and Gyula Illyés), featuring the eponymous Son of the White Horse, or more accurately Fanyűvő (Treetearer or Treeshaker), the superpowered son of a white mare.

Shortly after he's born, his mother tells him a story: long ago, there was happiness and peace as the Ősapa Esőkirály (Forefather Rain King) and Ősanya Hókirálynő (Progenitrix Snow Queen) ruled the world; however, their three sons grew restless and wished for wives. This soon proved to be to their ruin, as their princesses became curious about the lock they were never supposed to open, and unwillingly set the evil dragons free. The dragons seized power, killing the three brothers, relocating their apple castles to the Underworld and kidnapping the princesses. The Forefather escaped with his power stolen, while the Queen was captured when trying to save his sons in the form of a white mare. In captivity, she gave birth two times, with both of her sons disappearing. Finally freed thanks to the King's waning powers, she took refuge in the World Tree as she became pregnant a third time.
After the death of the White Mare, Fanyűvő sets out to find his similarly superpowered brothers, Kőmorzsoló (Stonecrumbler) and Vasgyúró (Ironkneader, Ironrubber, or Irontemperer). It is up to them to overthrow the dragons' rule and bring balance back to the world.

The film is mainly notable for its highly experimental and artistic visuals, extreme color palette, unique character designs and flowing animation, its surreal and deliberately dreamlike atmosphere. Objects, characters, and backgrounds shift and contort into one another, and all is held together by a heavy dose of Eurasian folk iconography and an overload of symbolism, with a special focus on Constellations, the cycle of days, seasons and years, the evils of technological progress, and loads of sexuality.

It had an extremely Troubled Production, with the finished film being far removed from the director's original vision. Compromized by strict communist censors to adapt a simplistic folktale, Jankovics embellished the story with the aforementioned cryptic smybolism to preserve his own ideas and bypass said censors, creating a film that underlines its shallow narrative with thematic depth. Still, the end result flopped at the box office, viewers found its art and sound design too unconventional and disliked its bold reinterpretation of a classic children's story (despite being more faithful than some gave it credit for). Its fantastical presentation, use of meaningful symbols and mythological allegory garnered some critical praise, but reviews criticized its simple story and flat characters, both carryovers from the source material. Though initially obscure abroad, the movie received some amount of acclaim, being named the 49th best-animated movie ever made at the 1984 Los Angeles Animation Olympics.

Since then, thanks to the internet and sporadic festival showings, it's slowly been discovered by animation enthusiasts the world over. Finally, the film's HD restoration (co-produced by the American Arbelos Films) was officially released across the Americas and other regions throughout 2019 and 2021. Of Jankovics's four feature-length animated movies (the others being Johnny Corncob, Song of the Miraculous Hind and The Tragedy of Man), this is the most widely known outside of his home country, and while initially disliking it because it couldn't live up to his original vision, later in his life he named it as his personal favorite.

Son of the White Horse provides examples of: