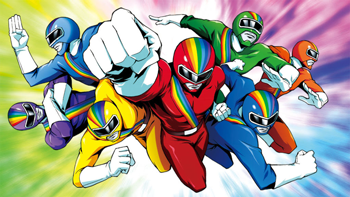 This is what happens when you mix Color-Coded for Your Convenience with Lucky Seven. Not only is a color motif used, but the specific colors involved are red, orange, yellow, green, blue, indigo and violet. These are often identified as the colors of the rainbow.

This trope was started by Isaac Newton, who really wanted there to be exactly seven colors to match the number of musical notes, the number of planets (then) known to be in our solar system, and days of the week. Isaac was wrong about this one, but since he was such a famous scientist, the belief that the visible light spectrum could be separated into exactly seven parts was widely held for a long time. This gave rise to the popular mnemonic "Roy G. Biv", a person's name constructed from the first letter of each color in order. Another mnemonic, more popular in the U.K., is "Richard Of York Gave Battle In Vain".

Indigo is generally considered the odd man out among the seven, due to it simply being a dark blue.note Around Newton's time, indigo was named after an expensive yet fast-fading blue dye

imported from India, and it was used for paints and textiles, most notably in denim, before the dye was replaced by the synthetic and permanent Prussian blue

in the 18th century and the more permanent Phthalocyanine blue in the 20th century. note There is evidence to suggest that Isaac Newton in fact considered the rainbow colours to be Red, Orange, Yellow, Green, Cyan, Blue, Violet. If the creator needs a few more colors to round out the cast, pink is a common addition, followed by black and white. Alternatively, some creators opt to branch out into the non-visible parts of the electromagnetic spectrum, such as infrared and ultraviolet. Curiously, cyan is missing, creating a conspicuous gap between the primaries green and blue. For printing inks and finer art, cyan, magentanote magenta is an odd color, since it is a combination of red and blue which are on opposite ends of the spectrum of visible light; due to the way the photoreceptors in your eye work, there's no pure spectral color that looks like magenta, so it doesn't appear in the rainbow, and yellow are the primary colors, making orange yet another odd color out along the same lines as indigonote as both are neither primaries nor secondaries and making cyan's absence even more conspicuous (unless one considers Newton’s model, where cyan/blue takes the place of blue/indigo)

Another way to think of this trope is Chromatic Arrangement plus four extra colors. Super-Trope to Rainbows and Unicorns. As a flag, the rainbow symbolizes gay pride and has great overall significance to the LGBT+ community; for rainbows used in this context, see Queer Colors.