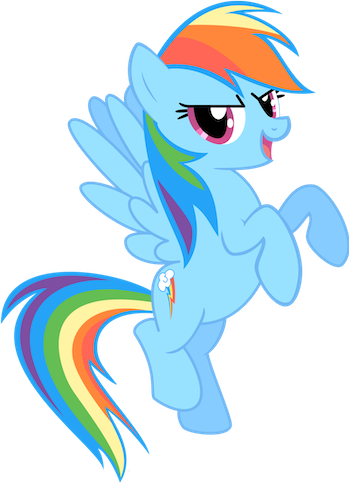 Always flies in style.
"They say I'm a big shot
That my ego's the size of a whale
My confidence comes off as cocky
But it gives me the courage to fail"
—Rainbow Dash's solo lines in "Flawless"
Debut: "Friendship is Magic, part 1" ("Mare in the Moon")
Voiced by: Ashleigh Ball, Izumi Kitta (Japanese)

The bearer of the Element of Loyalty. A speedy Pegasus hailing from Cloudsdale who loves to race and compete whenever she can convince someone to go against her. Though Prideful and a bit arrogant, with a somewhat self-centered attitude, she's a loyal friend and a strong leader. Works as a weather manager of Ponyville. Her Pillar of Old Equestria is Flash Magnus.

In the episode "Newbie Dash", she becomes a member of the elite flying group, the Wonderbolts.

Rainbow Dash has a self-demonstrating article.