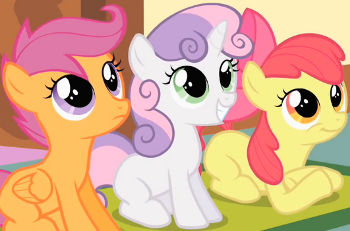 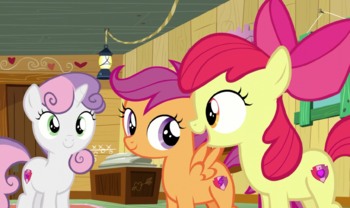 In the world of My Little Pony: Friendship Is Magic, the most important moment in a young pony's life is when they earn their cutie mark: a magical marking that appears on a pony's flank that represents what makes them special. It took these three fillies years to earn theirs, but what a mission they were on to find out who they were! And were they adorable while they were at it! The Crusaders form the secondary cast of the series, with a great many episodes of the series focusing on either their horribly botched attempts to get their own marks or their phenomenal success in helping others to get or come to terms with theirs.

As of the end of "One Bad Apple", a fourth Crusader, Babs Seed, has joined; she plans to start up a CMC branch in Manehattan. Go to the Mane Family Members page for that foal's entry. In My Little Pony Micro Series Issue #7, a creature named Imp joins for a short time as well. Go to the Expanded Universe page for that Mimicker's entry. 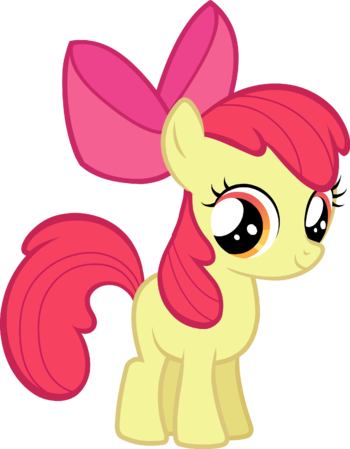 Apple Bloom is Applejack and Big Macintosh's little sister, an adorable earth pony with a yellow coat and fluffy pinkish-red mane. In "Call of the Cutie", she became very insecure about not having her cutie mark yet and began desperately searching for her special talent. After learning two of her classmates had the same problem, she formed a Power Trio with them in order to work together towards the same goal. Her special talent has been variously hinted as being repairing and/or buildings things (especially with wood)note in "The Show Stoppers", she's revealed to have fixed up their clubhouse more or less singlehandedly, and she's the one who offers advice on creating the sets to Sweetie Belle, prompting the others to suggest that maybe she should be doing the sets, or potion brewingnote she created a potion that infected her with Cutie Pox in "The Cutie Pox", created the Love Potion that went wrong in "Hearts and Hooves Day", and is shown studying potion-brewing in "Twilight Time", and doing quite well at it. 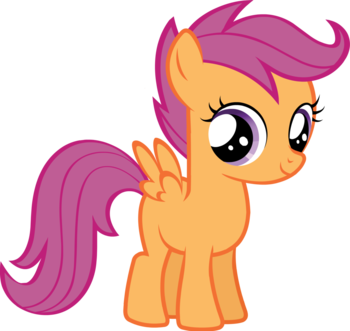 Not a chicken.
"These namby-pamby stories aren't getting us any closer to our cutie marks!"
First Appearance (Cameo): "Friendship is Magic, part 1" ("Mare in the Moon")
Full Debut: "Call of the Cutie"
Voiced by: Madeleine Peters
Singing by: Arielle Tuliao (Seasons 8-9)

An orange Pegasus with short, hot pink hair and purple eyes, Scootaloo is one of Apple Bloom's classmates. Though she originally hid the fact she hadn't earned her cutie mark yet, she and Sweetie Belle stood up for Apple Bloom during "Call of the Cutie" and became fast friends, forging the Cutie Mark Crusaders so that they could search for their talents together. A brash Tomboy, she effectively serves as the Power Trio's equivalent to her idol, Rainbow Dash. She has a scooter that she's very good at riding really fast. Her special talent has been variously hinted at being speed and/or stunts on her scooternote various episodes, most prominent in Season 4's "Flight to the Finish", where she manages to drive her scooter from Ponyville to the Crystal Empire, faster than a steam train, while carrying the other Crusaders, physical athleticism and/or dancingnote beyond her various moments as a Pint-Sized Powerhouse, in "The Show Stoppers", she's shown instructing Apple Bloom on how best to dance, and Apple Bloom suggests that maybe she should be their dance choreographer, and engineeringnote she was shown working on the engine of the float that the Crusaders used in "One Bad Apple", and she's been shown studying how to disassemble, fix and reassemble scooters and unicycles in "Twilight Time". 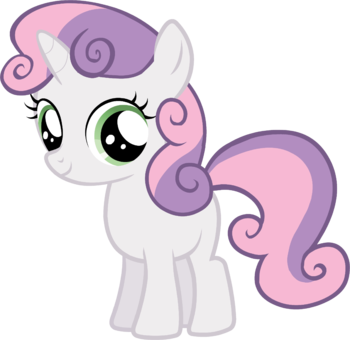 She has a song in her heart.
"Why does everypony always think I'm gonna sing?"
First Appearance (Cameo): "Friendship is Magic, part 1" ("Mare in the Moon")
Full Debut: "Call of the Cutie"
Voiced by: Claire Corlett
Singing by: Michelle Creber (Seasons 1-3)

Another of Apple Bloom and Scootaloo's classmates, and the Girly Girl to Scoot's Tomboy, this unicorn rounds out the CMC trinity. Like them, she has yet to discover her cutie mark and helps found the Cutie Mark Crusaders in hopes of discovering it. Idolizes her older sister Rarity and would like to follow her down the same career path, but isn't particularly good at it yet. Has a knack for singing and making up melodies, but balks at the thought of singing for an audience. It's strongly implied that singing and music are her special talent, but her Stage Fright keeps her from realizing this. In "Twilight Time", she's depicted studying magic under Twilight Sparkle, but it's unclear if this is a hint she may have a magic-related talent, or is simply her learning how to use the powers she can't yet control.