My Little Pony toys traditionally come with pets, so it's no wonder why each of the Mane Six, Spike, and Princess Celestia have their own iconic pets, who really are characters unto themselves. Most of them seem to have qualities that are opposite of their owner in some regard, yet also highlight another aspect of their owners.

For other animal characters, sapient or not, please see the Other Background Characters page. 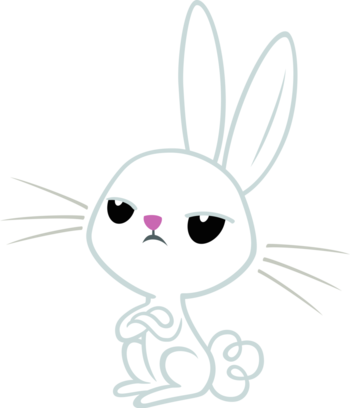 Debut: "The Ticket Master"
Voiced by: Andrea Libman (in Fluttershy's body in "She Talks to Angel")

A cute little White Bunny, Angel Bunny is Fluttershy's main animal companion. Not only does Angel help Fluttershy with tasks but he also makes attempts to bring the Pegasus out of her shell. Although adorable, Angel can be quite direct when interacting with others and if he doesn't like you, he will let you know, as Spike soon discovers when given the task of looking after him. 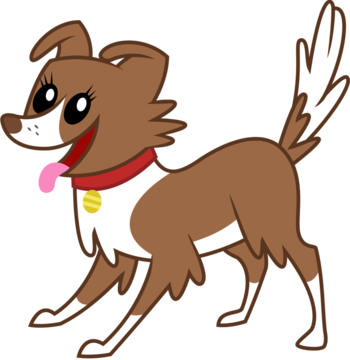 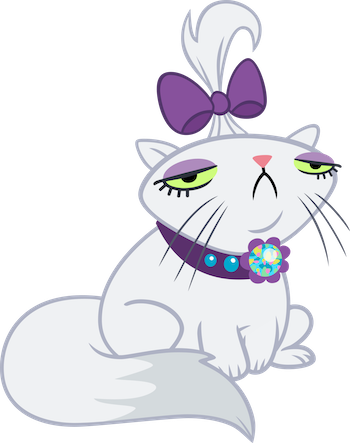 Rarity's fluffy Persian cat; often referred to as "Opal" for short. Although Rarity adores her, Opal is often frustrated with Rarity, presumably due to her owner's rough treatment of her. 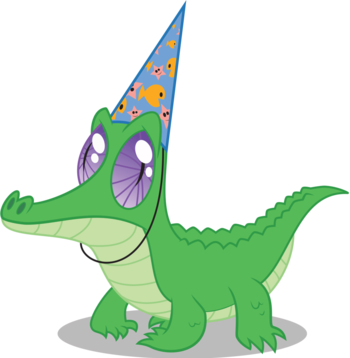 "What is life? Is it nothing more than the endless search for a cutie mark? And what is a cutie mark but a constant reminder that we're all only one bugbear attack away from oblivion? And what of the poor gator? Flank forever blank, destined to an existential swim down the river of life to... an unknowable destiny?" (licks eyeball)
Debut: "Feeling Pinkie Keen"
Voiced by: Lee Tockar

A tiny, toothless baby alligator who belongs to Pinkie Pie. He tends to bite or snap at anyone or anything near him but, due to his lack of teeth, never does any damage. The alligator usually spends his time staring into space and doing nothing except when he's blinking, swimming around in the bathtub or playing with a balloon. 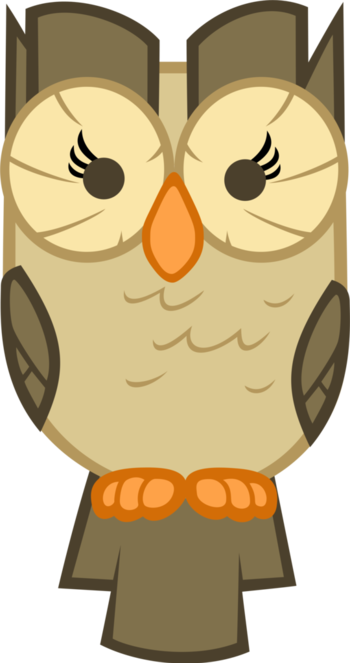 A brown owl who befriends Twilight Sparkle and becomes her No. 2 Assistant. He keeps Twilight company when she has to stay up past Spike's bedtime. 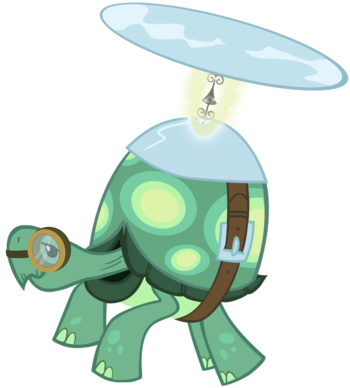 Debut: "May the Best Pet Win!"

In "May the Best Pet Win!", Rainbow Dash seeks out a pet to have for her own by holding a contest. While initially unimpressed by a hapless tortoise that Fluttershy insists Rainbow admit as a contestant, Rainbow Dash is won over when he's the only one to stop and help her during the final contest after her wing gets pinned under a huge boulder. As a result, she's inspired to declare the tortoise whom she names "Tank" as the winner and her new pet.

Other Pets and Animal Companions

Philomena's physical appearance throughout most of her episode until her eventual rebirth.
Click here to see her resurrected form. 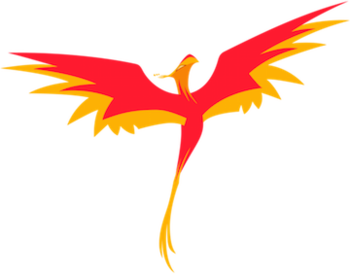 Debut: "A Bird in the Hoof"
Voiced by: Tabitha St. Germainnote according to this interview

Princess Celestia's pet phoenix. She initially appeared unwell, so Fluttershy birdnapped her to make her feel better. Of course, she never actually needed the medical attention on the basis of being a phoenix — so she made herself the most uncooperative patient ever for the hell of it. 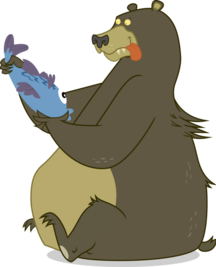 Harry the brown bear is one of Fluttershy's numerous animal friends, and the one most commonly seen with her after Angel Bunny. He lives in a surprisingly well-equipped burrow in the forest close to Ponyville. 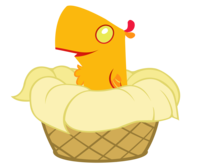 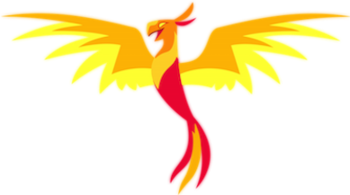 A tiny phoenix chick that hatched at the end of "Dragon Quest", well after his parents and siblings were driven away from their nest. Spike found his egg and almost smashed it on orders from the leader of a dragon gang, but decided to take it home with him and raise it. A series of pictures in the Cold Open of the pet-centric episode "Just for Sidekicks" shows that Spike has since returned Peewee to a pair of phoenixes to be properly reared, and he reappears as a wild adult phoenix in "Molt Down".

When the main characters started renovating Rarity's new Manehattan shop before opening day, they found that this family of raccoons living in the backroom. After some initial unpleasantness caused by the raccoons' refusal to move out, a happy medium was reached and the raccoons stay on as helpers and assistants in Rarity's boutique. 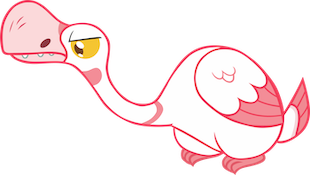 A flock of extremely ill-tempered geese brought in to boost Canterlot Castle's security, these birds are the final obstacle Twilight's gang needs to overcome in their break-in and remain part of the castle's security in later episodes. 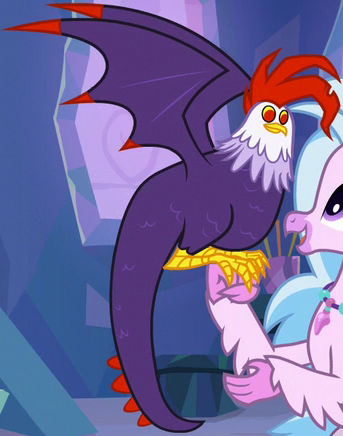 A cockatrice that Silverstream tames and befriends to help with her report on dangerous creatures in the Everfree Forest.

Example of:
Owls Ask "Who?"