Characters / Friendship Is Magic: The Princesses 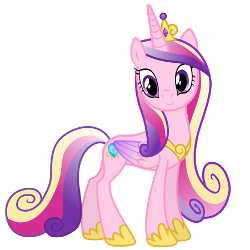 The greatest foalsitter in all the history of foalsitters!
"This day was going to be perfect. The kind of day of which I've dreamed since I was small."

Princess Mi Amore Cadenza, better known as Princess Cadance, is a pretty pearl pink princess pony and adopted niece of Princess Celestia. She is well acquainted with Twilight Sparkle, whom she used to foal-sit years ago. They ended up becoming sisters-in-law after Cadance married Twilight's brother, Shining Armor. Her main talent is bringing love to others, making her the perfect fit to govern the Crystal Empire, a regal city that spreads her love across Equestria.

Like Twilight Sparkle, she was not born as an alicorn. She was a Pegasus raised by Earth ponies until she reversed a love-stealing spell and was adopted by Celestia as her niece. 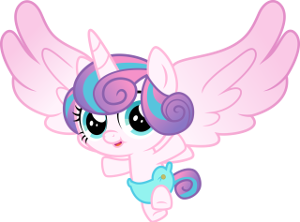 That's one heck of a wingspan.
Mama!

The newborn daughter of Shining Armor and Princess Cadance, and the niece of Twilight Sparkle. Flurry Heart is the first pony born as an alicorn in Equestria. She debuts in the sixth season opener, "The Crystalling".